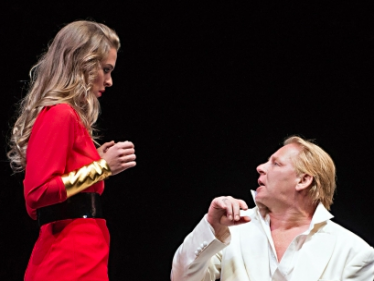 The longing for the amoral drives this tyrannical ruler - and the desire to once possess the moon. Caligula is the tragedy of boundless willpower. The Caligula, obsessed with the urge for the Absolute, believes that one's loyalty to one another can be gained through infidelity against the others. Caligula is not a brutal despot, but a sophisticated, intellectual criminal who keeps pushing his subjects, as in an experiment, to see what they endure. When he finally breaks down under the conspirators' daggers, his last words are: "I live. I live. "- An indirect request that the commitment to resistance never expires.

Vain, excessive and unpredictable: Even the contemporary ancient sources on the Roman emperor Gaius Caesar Augustus Germanicus, called Caligula ("little booties"), read like excerpts from the rainbow press - or from a textbook of psychiatry. He has replaced idols with his own portrait, he has slept with his sister and he wants to appoint his favorite horse consul.

"Theater was for Camus," says author and philosopher Michel Onfray, "a place of existential truth; political metaphor, ethical stage, existential consolation and opportunity for popular education. "So Camus gives the inscrutable emperor a certain tragic greatness. The shock of the death of his sister's lover has torn him from all the contexts of life: "From today my freedom knows no bounds."

Albert Camus (1913-1960) wrote his drama "Caligula" in the 1940s under the impression of World War II, which appeared to him as the "climax of all absurdity". The figure of the legendary, immoral Emperor Caligula served as an image for the totalitarian systems of his time - both fascist dictatorships and Stalinist communism.

Ben Becker is one of the actors who have the courage in art to transcend all borders, as his television, film and stage career impressively demonstrates. And so he is the ideal cast for John von Düffel and Marike Moiteaux for this special project, for which they have come together with decorator Eva Musil in Salzburg.