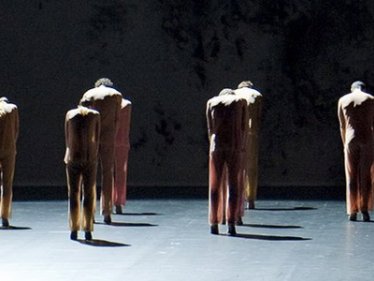 This programme brings together three pieces especially created for the Opera Ballet juxtaposing the artistic visions of three contemporary choreographers all of whom, in their different ways, affirm the musicality of movement. In Répliques, Nicolas Paul constructs his choreography around a sustained dialogue with the rich and contrasted music of Ligeti in a complex and profound exploration of reflections, mirror images and doubles. The set, created by the architect Paul Andreu, is constantly remodelled by effects of lighting and by the choreography, unveiling a subtly refined and mysterious piece.
In AndréAuria, Edouard Lock was inspired by the language of classical dance and points technique to explore new possibilities. Accompanied by the minimalist chord sequences of composer David Lang, Lock challenges the limits of speed and balance, pushing his interpreters almost beyond control, to breaking point. Pierre Rigal, an exceptional artist of the French ballet stage, has been invited to create his first choreography for the Company. An outstanding sportsman and mathematician with a diploma in film studies, Pierre Rigal has also frequented the world of the circus and rubbed shoulders with Hip hop artists, developing a personal language based on rupture and energy. Accompanied by the musician Joan Cambon, who has created music for a number of his works, he draws his dancers into an intrepid and inventive work that explores, through multiple definitions of the word “salut” the cycle of life and renewal.
Show more Show less