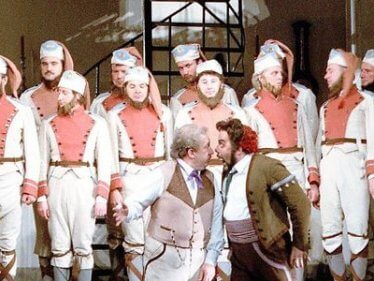 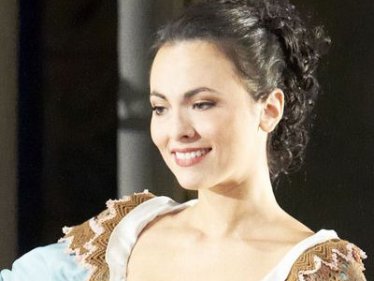 The young Count Almaviva from Seville is immortal in Dr. Ing. Bartolos ward Rosina in love. Under the name Lindoro, he succeeds in making the girl's attention. But since Dr. Bartolo Rosina wants to marry, he is suspicious of other men and monitors his ward at every turn. In order to see his adored, Almaviva disguises himself - on the advice of the cunning barber Figaro - as a soldier and asks Bartolo to be quartered in his house. He refuses and tries to chase away the intruder loudly. Aware of the noise of the two contestants, guards invade. Almaviva can only escape his arrest because he reveals his true identity to the captain of the department by presenting a passport. The scene ends in general confusion. A little later, the Count, disguised as a music teacher, tries another attempt. To enter Bartolo's house. The situation is complicated on the one hand by the additional emergence of the real music teacher, Don Basilios, who, however, convinced by the persuasive art of Figaro and the earl of the Count, the width, and on the other by the constant distrust Bartolos, who also wants to be present at the singing lesson , Last but not least, Bartolo also sees through this plot and chases away the uninvited guests. He also knows how to make Rosina doubt the love of the alleged Lindoro and to persuade her to marry together. Rosina even reveals the planned escape with Lindoro. Then Bartolo orders a notary and hurries off to contact the guards. During his absence, Figaro and Almaviva, who now also identifies himself to Rosina as Count, invade the house. The love between the two young people is restored and the notary, who has already rushed by, completes the wedding ceremony. The little later returned Bartolo must give himself beaten.