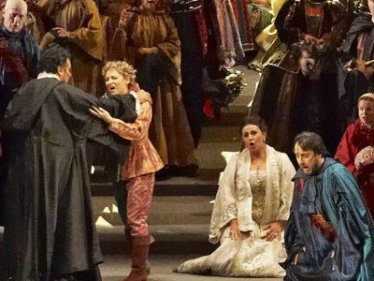 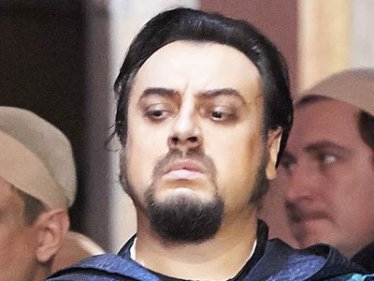 Act 1, Scene 1
Courtiers, delegates, officers and citizens are waiting for an audience to begin at the king´s palace in Stockholm. Most of them are favourably disposed towards the king, only Count de Horn and Count Warting and their supporters are eager to take his life. Gustavus III enters and accepts the petitions of his subjects. Oscar the page gives him a list of the guests invited to a masked ball. To his delight, the king fins that the list includes the name of Amelia, with whom he is secretely in love. Amelia, however, is the wife of his secretary and most faithful friend Count René Ankarström. After the gathering has dispersed at a sign from the king, Count Akarström enters. He finds the king in a pensive and gloomy mood, but attributes this to worry about the conspiracy engineered by Horn and Warting. However, the king does not wish to hear any more about it, although Ankarström persistently warns him of the impending dangers. Oscars enters with the supreme judge, who asks the king to sign a sentence of banishment against the soothsayer Ulrica Arvedson. When asked his opinion by the king, Oscar defends the soothsayer in an ironic ballad, thus awakening the king´s curiosity. Following a sudden impulse, he invites those waiting in the antechamber to visit the soothsayer three hours after sunset. Disguised as a fisherman, he himself intends to have his future told. The courtiers look forward to some fun, while Ankarström again warns the king against the ploters, who hope to have an opportunity to make an attempt on the king´s life.

Act 1, Scene 2
The common people have gathered together at the soothsayer´s abode. Fascinated, they watch while Madame Arvedson, as if in a trance, conjures up the “King of the Abyss”. The king enters, but is pushed back by the crowd. Ulrica is now ready to make her prophecies, whereupon the sailer Christian steps forward, wanting to know whether and when he will be rewarded for fifteen years faithful service to the king. Ulrica promises him promotion and financial reward. The king immediately makes this come true: unnoticed, he slips the sailor an officer´s commission and a roll of money. The sailor soon discovers these, to the great pleasure of the crowd. One of Amelia´s servants asks to be admitted and begs the soothsayer for a private audition for his lady. The king hides as the people are sent out. He thus discovers that although Amelia secretly loves him, she wants Ulrica to give her a remedy for this love. Ulrica gives her advice: Amelia must herself look for a certain herb at midnight at the place of execution beneath the gallows. She intends to go to this terrible place the same night, and the king resolves to follow her there. A crowd of curious onlookers, including members of the court and the plotters in disguise, force their way in. Amelia retires. In a cheerful canzonet, the king describes the dangers of life as a fisherman, and is the first to have his palm read. After some initial hesitation, Ulrica predicts his imminent death at the hands of a friend. Everybody is appalled, including the plotters, and only the king himself laughs at the gullibility of his court. At his insistence the soothsayer also names the murderer: it will be the person who first gives him his hand. Nobody dares to refute the prophecy when Ankarström appears. Unsuspectingly, and to the general relief of the onlookers, he shakes the king´s hand in welcome. Ulrica recognizes the king, who has decided against her banishment and makes her gift. Word has spread that the king is present, and an enthusiastic crowd of people forces its ways in and pays homage to the monarch.

Act 3
At midnight Amelia arrives at the place of execution to pick the herb oh which Ulrica has told her. The king, having secretly followed her, steps forwards and confesses his love for her. At this insistence, Amelia is moved to make a confession of love, but legs him not to forget that she is the wife of a loyal friend. Suddenly Count Ankarström approaches to warn the king that the plotters have followed him. Amelia has time to hide her face behind a veil. The king changes cloaks with Ankarström and hurries away after his friend has promised him to escort the veiled stranger back to the town, and to leave her at the gates of the town without speaking to her or looking at her. Just as Amelia and Ankarström are about to leave, the conspirators arrive and find not the king, but only the latter´s secretary. Disappointed at the failure of their murderous plans, they at least want to see who the veiled lady is. Ankarström tries to prevent them, but when the men draw their weapons Amelia draws back her veil to reveal her face. The conspirators deride Ankarström for walking with his own wife by night at the place of execution. Ankarström is shattered, feeling that he has been deceived by both wife and friend. He invites Horn and Warting to visit him next day and escorts his depondent wife home to the scornful laughter of the conspirators.

Act 3, Scene 1
Ankarström threatens to kill Amelia, and is not even prepared to listen her protestations of innocence. She begs him to allow her to embrace her son just one last time. Ankarström grants her request, and then decides to kill the king in her place. Filled with bitterness, he reflects on his former love for Amelia, the king´s apparent breach of faith, and the hatred into which the old friendship has been transformed. When the conspirators appear, he tells them that he knows about their assassination plans, and that from now on they can consider him their man. In order to prove his credibility, he offers them this only son as a pledge, and the new alliance is sealed with an oath. Ankarström wishes to reserve for himself the privilege of killing the king, but his request is refused: this will be decided by drawing lots. The unsuspecting Amelia, who wishes to announce Oscar the page, has to draw the lot: it falls to Ankarström. Oscar is admitted, bearing an invitation to the masked ball which Amelia must also attend. Amelia suspects what her husband and the conspirators have in mind, and desperately tries to think of a way out. Ankarström, Horn and Warting agree on a sign of recognition: a blue costume with a blood-red sash – and the password “Morte”.

Act 3, Scene2
In his study the king resolves to give up Amelia, and to send her and Ankarström back to the latter´s home town; he even signs a decree to this effect. Oscar brings the king an anonymous letter from an unknown lady warning him about an attack on his life. However, Gustavus does not want to appear timid, and decides to go to the ball to see Amelia once again.

Act 3, Scene 3
The guests have gathered in the ballroom, among them the masked conspirators. Ankarström tries to find out from Oscar which costume and mask the king is wearing, but is initially given an evasive answer. However, Oscar then gives him the answer he requires. Amelia and the king meet among the hustle and bustle of the ball. Ankarström, who has been watching the couple, throws himself at the king and fatally wounds him with his dagger. The guards and the angry throng seize the assassin, whom the dying king forgives. He protests that Amelia´s honour is untarnished, gives the shaken Ankarström the transfer decree and dies.