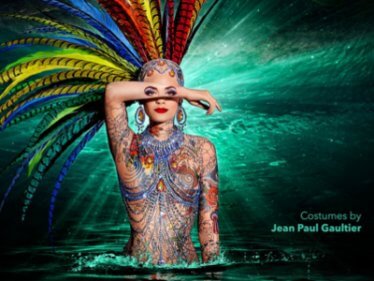 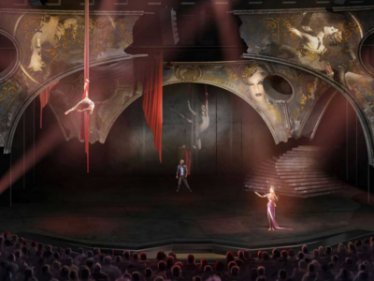 THE ONE GRAND SHOW

Pure glamour with costumes by Jean Paul Gautier. A fantastical journey through time in search of the person, who means everything to us. THE ONE.

"I have dreamed of working on a revue ever since I was a little boy."

An underground party rouses an abandoned revue theatre from a deep sleep. A young guest loses himself in the extraordinary aura of this stunning setting. The former theatre director rekindles the splendour and glamour of times past in his mind’s eye. Past and present blur in a euphoric waking dream. While everything breaks apart around him, begins to spin and even the ground opens up beneath him, he senses what he seeks: that one person to support him.

Jean Paul Gaultier designed the over 500 daring and extravagant costumes. Gaultier is one of the few world stars of the fashion industry, a living legend of Parisian haute couture. The spectacular light design is by Emmy Award winner, Peter Morse, who previously worked for stars of the likes of Michael Jackson, Madonna, Barbra Streisand, Prince and Bette Midler.

THE ONE Grand Show is a dreamlike journey through time in search of the person that means everything to us - THE ONE. Unlike musicals, revue shows do not have a common thread. It is a collage of glamorous show images with a common theme – here, the visions from a young man’s dreams.

The dimensions are vast: more than 100 artists on the world’s biggest theatre stage, a production budget of eleven million euros, the most lavish show in Europe. One technical highlight of the new Grand Show is the stage floor, under which is a vast body of fluorescent water.

The New York Times recommends the Palast as “must-see” during every visit to Berlin. Lonely Planet is impressed with the “mind-boggling special effects” and “stunning productions”. The Sunday Times dubs the Palast “Las Vegas in Berlin”. On the major review portals, up to 96 per cent of guests recommend our show.

Also suitable for international guests, who do not speak German.