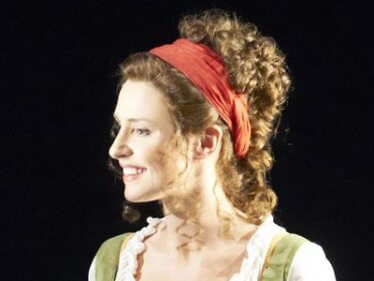 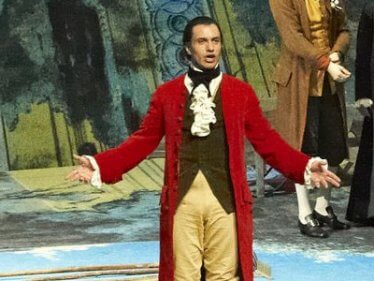 Act 1
Figaro and Susanna, the countess’s maid, want to get married. Susanna explains to her unsuspecting fiancé why their new bedroom is situated directly between the count’s room and that of the countess: so that the count will have easier access to her, for Almaviva is looking for a little extramarital adventure. As a progressive lord of the manor, he abolished the old right of the first night, but would like to reinstate it in Susanna’s case. Figaro has another problem: some time ago, he borrowed money from Marcellina and promised her in writing that he would marry her if he was unable to repay the debt. Aided by Doctor Bartolo, Marcellina now wants to compel him live up to his agreement. The count has surprised the page Cherubino alone with Barbarina, the palace gardener’s daughter, to whom the count himself pays occasional visits. Cherubino, whom the count dismissed from his service on the spot, relates his woes to Susanna. He wants the countess, whom he admires ardently, to intercede with the count on his behalf. Count Almaviva enters unexpectedly, Cherubino hides quickly, and the Count to starts fervently in protest his affections. They are interrupted by Basilio. The count himself is forced to hide. Basilio tries to interest Susanna in a liaison with the count. He also mentions the rumours about Cherubino’s passionate love for the countess. Incensed, Almaviva bursts from his hiding place and relates, with wild gesticulations, how he surprised Cherubino recently with the gardener’s daughter. To his astonishment, he discovers Cherubino here too, but must stifle his wrath since the page must have overheard everything from his hiding place. Figaro arrives with all the servants to persuade the count finally in give his consent to the wedding. Almaviva promises to give it – later. Cherubino is pardoned only the extent that he is to leave at once and joint the count’s regiment as an officer.

Act 2
Countess Rosina feels neglected by her husband and turns to Susanna and Figaro for help. Figaro has come up with two plans: he intends to provoke the count’s jealousy with an anonymous letter, thereby making him forget about Susanna. In addition, Cherubino, disguised as Susanna, is to make an assignation with the count in the palace garden, where Figaro will surprise him in a compromising situation and expose him. Cherubino is trying on girl’s clothes in the countess’s room. The count appears unexpectedly; the countess and Susanna hide the page in the dressing-room. The suspicious count demands the key to the locked room, and the two of them finally go off to fetch tools to break open the door. Meanwhile, Susanna lets Cherubino out of the dressing-room, who in his fright leaps out of the window. On their return the countess confesses to her husband that Cherubino is in the dressing-room. To the amazement of both count and countess, Susanna steps out of the dressing-room, and the count must apologize to his wife. To exonerate themselves, the countess and Susanne admit to the count that the anonymous letter was written by Figaro and was a trick. Figaro unwillingly confirms this to be the case. Now the irate gardener enters and tells his master that someone jumped out of the countess’s bedroom window and broke a flower pot – and lost an officer’s commission. All that was missing was the count’s seal. Marcellina and Doctor Bartolo appear and demand that Figaro comply with his contract. The count once again puts off giving his consent to the wedding.

Act 3
Susanna wants no find the money Figaro owes and accordingly agrees to a clandestine meeting with the count. However, he chances to notice that Susanna intends to deceive him and so confirms the judge’s decision: Figaro must pay – or marry Marcellina. In the ensuring argument, it turns out that Figaro, who did not know his parents, is the son of Doctor Bartolo and Marcellina, the product of an earlier affair between the two. The happy reunion of parents and son is initially misunderstood by Susanna, who has in the meantime been given the necessary money by the countess. However, the matter is soon cleared up. Countess Rosina and Susanna have come up with their own plan: without Figaro’s knowledge, they write a letter to the count, asking him to meet Susanna that night in the palace park; however, in reality the countess, disguised as Susanna, will be waiting for him. Cherubino did not go to join his regiment, but sought refuge with Barbarina. When he takes part in the festivities dressed as a girl, Barbarina’s father exposes him. The count see a final opportunity to delay the wedding, but Barbarina threatens to reveal the nature of the count’s relationship with her. Now the wedding can finally take place. But the folly has not yet ended: as they dance, Susanna gives the count the fake love letter.

Act 4
The letter to the count was sealed with a pin that he was to give to Susanna as a sign of his agreement. Barbarina has lost the pin and now searches for it desperately. Figaro finds out about the planned rendezvous; since he was not party to this plan, he is outraged at his fiancée Susanna’s unfaithfulness. Confusion reigns that night in the palace park. The count waits for Susanna, who has switched clothes with the countess. Figaro, his parents and Basilio intend to catch the count in flagrante delicto and expose him. To this end they have alerted the entire staff of servants. In the midst of all this, Cherubino seeks his Barbarina. One case of mistaken identity follows another. Finally Figaro realizes what is happening. He makes love to the apparent countess (in reality Susanna in disguise) so that the count cannot but overhear the conversation. The count surprises the two of them, summons everyone and publicly accuses the “countess” of being unfaithful. The others gradually come out of hiding. Finally the real countess appears, still in Susanna’s dress, and reveals her identity. Count Almaviva begs his wife’s forgiveness. The countess has achieved the purpose of her intrigue, forgives her husband, and all those present celebrate the happy ending to this “day of folly”.