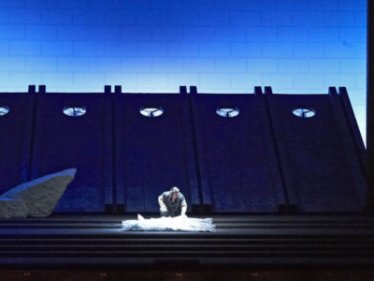 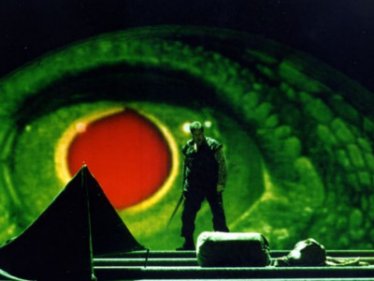 Act 1
Siegfried was brought up by Mime, the blacksmith, in the forest. Mime forges a sword for the unruly boy, but cannot please him – the boy shatters the sword. Mime’s world is altogether too restrictive for him. He asks about his parents, and Mime finally tells him about his mother, who died while giving birth to Siegfried, and shows him the broken sword that his father carried to his last battle. Sigfried demands that Mime weld the pieces into a better weapon and runs back into the forest. Wotan appears on the scene, dishuised as a wanderer. He plays a guessing-game with Mime, but Mime loses the wager – and his head, to the man who knows no fear. The stranger goes on to reveal that one man alone can weld the fragments of the sword: That man is Siegfried. However, Mime tries to persuade Siegfried that he is missing something by knowing know fear – Siegfried is evidently confusing it with love, of which he has a vague presentiment. Mime promises that Siegfried will learn fear in battle with the dragon Fafner, the former giant. The dragon guards the treasure of the Nibelungs that Mime plans to secure for himself through Siegfried. Siegfried, who has no respect for craftsmanship, forges the sword at his first attempt. Meanwhile Mime brews a potion with which he plans to kill Siegfried, once the latter has slain the dragon.

Act 2
Mime’s brother Alberich is guarding the entrance to the dragon’s cave when he comes across the wanderer. He recognizes him and senses danger. However, Wotan calms him: he does not want the treasure and ring himself, but Mime will try to seize it with the help of a young hero. Wotan and Alberich leave the scene. In the grey morning light, Mime leads Siegfried to the cave and leaves him there. A woodland bird catches Siegfried’s attention. He answers the bird first on a flure he carved himself and then on his horn, at the sound of which the dragon emerges from its cave. After a brief fight, Siegfried plunges the sword into its heart, and the dying Fafner warns him anout the ring. As soon as the dragon’s blood touches his lips, Siegfreid starts to understand the bird’s song. He learns of the ring, the treasure and the helmet, and he sees through Mime’s fawning: when Mime offers him the poisoned potion, he slays him. He then follows the woodland bird, who tells him of the rock of the Valkyries.

Act 3
The wanderer wakens Erda: he wants to relinquish his might to the young Siegfried, whose innocence is weakening Alberich’s curse. Siegfried enters and treats the old man no kindlier than Mime. He strikes the spear that once shattered his father’s sword out of the wanderer’s hand and clears his way to the rock. There he finds the sleeping Brünnhilde. The couple awake to their love for each other.