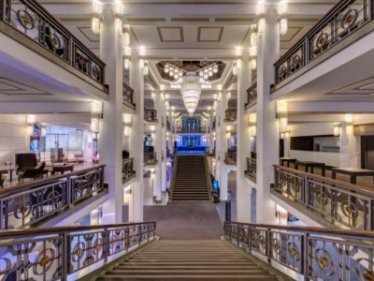 The extraterrestrials are among us. Anyone who drifts through Berlin at night can sense it. Among them, a BMX cyclist and the lady, who lives in Berlin’s TV tower with her poodles and who feels more drawn to the aliens than to her fellow human beings.

A love between heaven and earth? This requires higher powers, such as Nefertiti. Her bust on Museum Island makes her Berlin’s most famous inhabitant. Every night she comes to life as the extraterrestrials’ queen. Her Egyptian name means ‘the Beautiful One has come’ and one of her royal titles was the provident ‘Great One of the Palast’. But where did she come from and what has kept her young for 3,400 years?

Half a million people have already seen the Grand Show and the enthusiasm every evening is simply infectious. On the major review portals, 93, 95 and even 97 per cent of guests recommend us!

Unlike musicals, revue shows do not have a common thread. The typical collage of breathtaking show images is a declaration of love to Berlin. And THE WYLD (from “the wild”) leads through the wonderful and quirky wilderness of this metropolis.

With over one hundred artists on the world's biggest theatre stage and a production budget of ten million euros, it is one of the most elaborate shows outside of Las Vegas. Parisian star designer, Thierry Mugler, designed the spectacular costumes for the show.

Berliner Rundfunk radio broadcaster has named it “the best show in Berlin”. Ethereally beautiful and simply out of this world.

Tip! Tickets for our performances mostly sell very well. Therefore, the sooner you book, the greater the choice of seats.