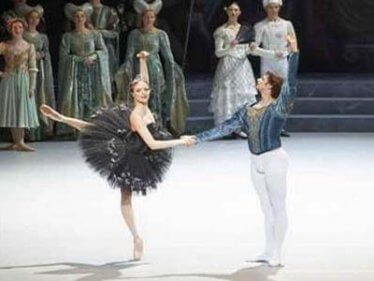 
Below is a synopsis based on the 1895 libretto. Swan Lake is generally presented in either four Acts, four Scenes (primarily outside Russia and Eastern Europe) or three Acts, four Scenes (primarily in Russia and Eastern Europe). Some productions in the West include a prologue that shows the actual transformation by which Princess Odette is first turned into a swan. The biggest difference of productions all over the world is that the ending varies from romantic to tragic.

A magnificent park before a palace.

[Scène: Allegro giusto] Prince Siegfried is celebrating his birthday with his tutor, friends and peasants [Waltz]. The revelries are interrupted by Siegfried’s mother, the Queen [Scène: Allegro moderato], who is concerned about her son’s carefree lifestyle. She tells him that he must choose a bride at the royal ball the following evening. Siegfried is upset that he cannot marry for love. His friend Benno and the tutor try to lift his troubled mood. As evening falls [Sujet], Benno sees a flock of swans flying overhead and suggests they go on a hunt [Finale I]. Siegfried and his friends take their crossbows and set off in pursuit of the swans.

A lakeside clearing in a forest by the ruins of a chapel. A moonlit night.

Siegfried has become separated from his friends. He arrives at the lakeside clearing, just as a flock of swans land nearby [Scène. Moderato]. He aims his crossbow at the swans [Scène. Allegro moderato-], but freezes when one of them transforms into a beautiful maiden, Odette [Scène. -Moderato]. At first, she is terrified of Siegfried. When he promises not to harm her, she tells him that she is the Swan Queen Odette. She and her companions are victims of a terrible spell cast by the evil owl-like sorcerer Von Rothbart. By day they are turned into swans and only at night, by the side of the enchanted lake – created from the tears of Odette's mother – do they return to human form. The spell can only be broken if one who has never loved before swears to love Odette forever. Von Rothbart suddenly appears [Scène. -Allegro vivo]. Siegfried threatens to kill him but Odette intercedes – if Von Rothbart dies before the spell is broken, it can never be undone.

As Von Rothbart disappears, the swan maidens fill the clearing [Scène: Allegro, Moderato assai quasi andante]. Siegfried breaks his crossbow, and sets about winning Odette’s trust as the two fall in love. But as dawn arrives, the evil spell draws Odette and her companions back to the lake and they are turned into swans again.

An opulent hall in the palace.

Guests arrive at the palace for a costume ball. Six princesses are presented to the prince [Entrance of the Guests and Waltz], one of whom his mother hopes he will choose as his bride. Then Von Rothbart arrives in disguise [Scène: Allegro, Allegro giusto] with his enchantress daughter, Odile, transformed so that she appears identical to Odette in all respects. Though the princesses try to attract the prince with their dances [Pas de six], Siegfried, mistaking Odile for Odette, has eyes only for her and dances with Odile. [Scène: Allegro, Tempo di valse, Allegro vivo] Odette appears as a vision and vainly tries to warn Siegfried that he is being deceived. But Siegfried remains oblivious and proclaims to the court that he intends to make Odile his wife. Von Rothbart shows Siegfried a magical vision of Odette and he realises his mistake. Grief-stricken, Siegfried hurries back to the lake.

Odette is distraught at Siegfried’s betrayal. The swan-maidens try to comfort her, but she is resigned to death. Siegfried returns to the lake and finds Odette. He makes a passionate apology. She forgives him and the pair reaffirm their love. Von Rothbart appears and insists that Siegfried fulfill his pledge to marry Odile, after which Odette will be transformed into a swan forever. Siegfried chooses to die alongside Odette and they leap into the lake. This breaks Von Rothbart's spell over the swan maidens, causing him to lose his power over them and he dies. In an apotheosis, the swan maidens watch as Siegfried and Odette ascend into the Heavens together, forever united in love.