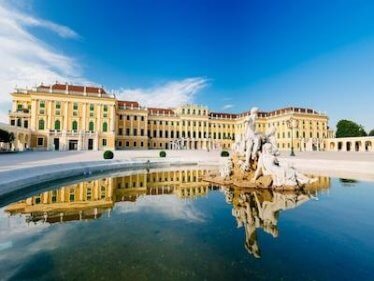 Procedure
Sights of the Vienna Ringstrasse

The city tour starts at Operngasse 8 and takes you to the Ringstrasse, past the most popular tourist attractions.

First you go along the Ringstrasse to the impressive Vienna State Opera. The famous Opera Ball takes place here every year. Nearby is the magnificent Hofburg, the former winter residence of the emperor.

We continue past the monumental buildings of the Art History and Natural History Museum. Immediately afterwards you will see the neoclassical parliament, the impressive town hall and the famous Burgtheater.

Guided tour of Schönbrunn Palace
Once in Schönbrunn, you can take a guided tour of Austria's most popular tourist attraction without waiting! The former imperial summer residence is now a World Heritage Site and attracts millions of people from all over the world every year.

Visit the historic state rooms and see how the imperial family lived. You also have time to stroll through the imperial palace gardens or enjoy a cup of Viennese coffee and an original Viennese apple strudel.

The tour ends at the Vienna State Opera.

Up to 2 languages ​​possible per tour.