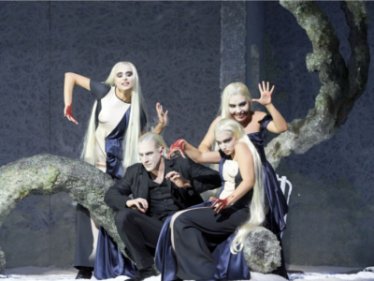 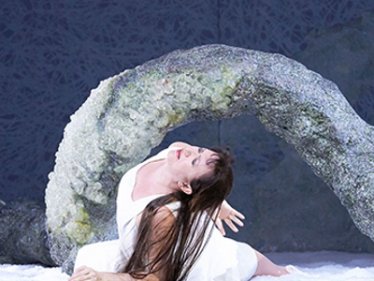 This opera - the composer's second last work - was written around 1900. Musically it is related both to the Czech national school and in individual aspects to the musical drama of Richard Wagner.


Unlike the mischievous wood nymphs, the water nymph Rusalka does not tease the awakening water goblin, but confesses to him her desire to acquire a human form and a human soul in order to fulfil her love for a prince whom she has often observed by the lake. Although the water goblin warns Rusalka, he advises her to seek Ježibaba's assistance. The latter appears and drives a hard bargain with the impassioned nymph: Rusalka will be able to adopt the human form, but will lose the power of speech. However, if she is nevertheless unable to win the prince's unfailing love, only the death of her lover will enable her to return to the kingdom of nymphs.

The water goblin puts a curse on the Prince before pulling Rusalka back into his underwater realm. A short time later, Ježibaba offers the lonely and lamenting Rusalka a means of returning to the kingdom of nymphs for ever. She hands Rusalka a dagger with which to murder her unfaithful lover. But Rusalka throws the dagger into the lake. Filled with remorse, the prince comes down to the lake: Rusalka appears to him as a will-o'-the-wisp. He begs her to free him of his guilt. Though Rusalka warns him that her embrace will cost him his life, he insists on a final kiss. He dies in her arms, and Rusalka sinks back into the lake.
Show more Show less