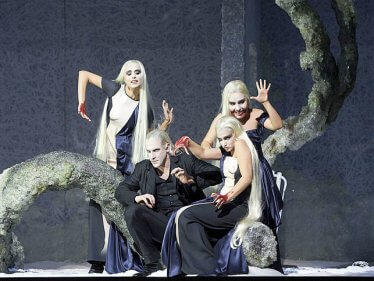 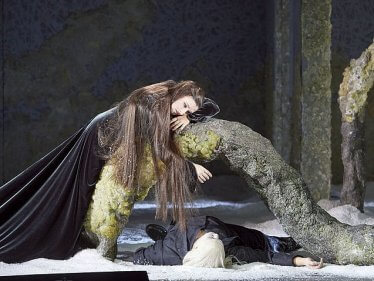 Der Prinz Piotr Beczala
Die fremde Fürstin Elena Zhidkova
Der Wassermann Evgeny Solodovnikov
Rusalka Kristīne Opolais
Jezibaba Monika Bohinec
Unlike the mischievous wood nymphs, the water nymph Rusalka does not tease the awakening water goblin, but confesses to him her desire to acquire a human form and a human soul in order to fulfil her love for a prince whom she has often observed by the lake. Although the water goblin warns Rusalka, he advises her to seek Ježibaba's assistance. The latter appears and drives a hard bargain with the impassioned nymph: Rusalka will be able to adopt the human form, but will lose the power of speech. However, if she is nevertheless unable to win the prince's unfailing love, only the death of her lover will enable her to return to the kingdom of nymphs.