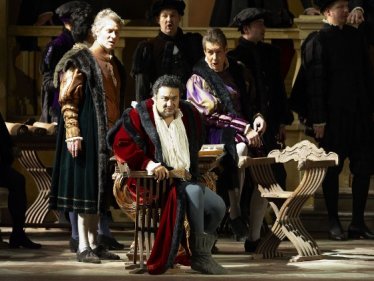 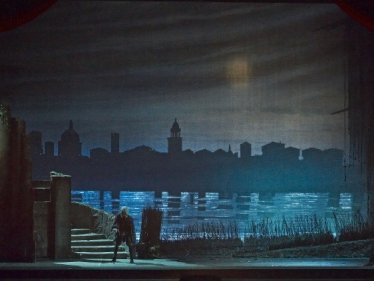 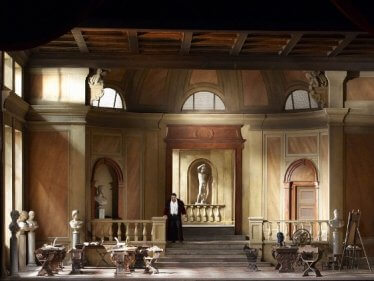 ACT I
Scene 1. The grand hall of the palace of the Duke of Mantua
A ball is in progress. The duke tells Borsa about a beautiful girl who has caught his eye in church, but to whom he has not spoken. His attention is caught by the appearance of the Countess Ceprano and he expounds his philosophy that all women are alike; he can give his heart to one as readily as another and constancy is a bore. His approaches to the countess are frustrated by her nervousness of her jealous husband, until the hunchbacked jester Rigoletto distracts the count and allows the duke to slip off with the countess.

In Rigoletto´s temporary absence Marullo has a bit of scandal to tell: he has discovered that Rigoletto has a mistress. Rigoletto enrages Ceprano by his lack of subtlety in suggesting to the duke that he dispose of the jealous husband by cutting off his head. The courtiers are tired of Rigoletto´s tricks and gibes and plan to be revenged on him.

Monterone bursts in demanding to be heard. Taunted by Rigoletto for his concern about his daughter´s lost honor, he curses the duke and Rigoletto - to the superstitious horror of the latter.

Scene 2. A street with Rigoletto´s house on one side and Ceprano´s palace on the other
Brooding on the curse, Rigoletto is accosted by Sparafucile, a killer for hire, offering his services and (like the courtiers, thinking that Rigoletto keeps a mistress) pointing out that Rigoletto has a rival. Rigoletto dismisses him, but takes note of where he may be found if needed. He reflects that he is no better than Sparafucile, who kills with the sword, as he does with his tongue. A deformed man, forced to amuse others for his existence, he blames the duke and the court for his own wickedness.

Only in his home is he another, better man. He tenderly embraces his daughter Gilda. He evades her questions about his life and family, remembring the dead wife who had loved him despite his deformity. He tells Gilda that she is everything to him and is terrfiied when she begs to be allowed to leave the house. He summons her duenna Giovanna and instructs her to look to his daughter´s safety

He goes outside to investigate a noise and the duke slips in and hides, throwing a purse to Giovanna to ensure her silence. Having found no one, Rigoletto bids his daugther farewell - to the surprise of the duke, who had been unaware that Gilda was his jester´s daughter. Gilda confesses to Giovanna that she feels guilty that she has not told her father of the handsome young man she has seen at church. She muses about her love for the stranger, but is alarmed when he suddenly emerges and professes his love. He calms her fears and she admits to her love. He tells her he is a poor student called Gualtier MaldË. Hearing sounds outside he leaves and she reflects on the name of her beloved as she prepares to go to bed.

In the street the courtiers are planning her abduction. Rigoletto, unaccountably nervous, reappears and they pretend they are carrying off Countess Ceprano, enlisting his help to hold the ladder, after blindfolding him. It is only when they have broken into his house and carried off Gilda that he tears off the bandage and realises what has happened, blaming Monterone´s curse for his misfortune.

ACT II
A room in the duke´s palace
Like Rigoletto, the duke had gone back to the house to find Gilda gone. His concern for her convinces him that this time he is really in love. The courtiers describe their exploit to him and he soon realises it is Gilda they have carried off, and rushes to comfort her with the revelation of his true identity.

When Rigoletto comes in search of Gilda, the courtiers feign indifference. Realising that she is with the duke he first abuses the courtiers, then begs them to restore his daughter. As she emerges in a state of disarray from the duke´s bedroom, he orders the courtiers to leave. Gilda tells him about the young man at church and about how she had been abducted, though making no reference to what has occurred just now. Rigoletto comforts her and promises they will leave Mantua. Monterone, led by on his way to prison, laments that the duke is still untouched by his curse. Rigoletto swears that Monterone will be avenged by him, as Gilda pleads in vain for mercy.

ACT III
A tumbledown inn in a deserted spot on the banks of the River Mincio Rigoletto has brought Gilda to Sparafucile´s dwelling in an effort to convince her that the duke, whom she still loves, is faithless. They watch as, after proclaiming his belief in the fickleness of women, he makes advances to Sparafucile´s sister Maddalena, who, while pretending disbelief in his extravagant protestations, is not indifferent to him. Rigoletto sends Gilda home to change into men´s clothes and set off for Verona, where he will follow her the next day. Sparafucile collects half his fee - the rest is to be paid when he hands over the duke´s body at midnight.

Gilda returns as a storm begins, and listens as Maddalena pleads with her brother to spare the duke - even insulting his professional pride by suggesting he murder his client, Rigoletto, instead. He agrees that if anyone arrives before midnight he will kill him instead, and Gilda determines to sacrifice herself for the duke. She knocks on the door, is killed and her body thrust into a sack and handed to Rigoletto when he returns.

Refusing Sparafucile´s offer of help, Rigoletto exults in his revenge, only to hear the duke singing in the distance as he leaves. Tearing open the sack, he discovers Gilda on the point of death. She begs his forgiveness for disobeying him, explaining that she is dying to save the duke. Promising to pray for him in heaven with her mother, she dies, leaving Rigoletto to the realisation that the curse has been fulfilled.
Show more Show less