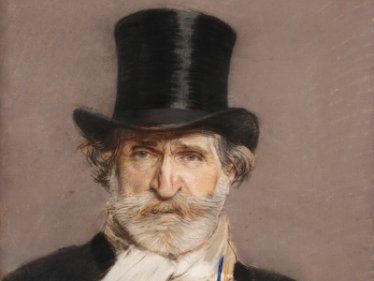 The setting is the court of the Duke of Mantua during the Renaissance. The Duke, an adulterous libertine, is hosting a party. As he walks away with the Countess of Ceprano on his arm, the court jester, Rigoletto, makes jokes at the expense of the Countess’s jealous husband. Marullo, a courtier, then reveals to the guests that the jester has a lover and Count Ceprano sees in this an opportunity for revenge. The old Count of Monterone enters. He has come to court to denounce the Duke for seducing his daughter but he ends up in prison. Rigoletto makes fun of him, too, so Count Monterone curses him. The jester’s face darkens with gloom. He has a daughter whose existence he has kept from everyone, especially the debauched Duke. She is in fact “the lover” Marullo was referring to. The aptly named Burgundian assassin, Sparafucile (Gunshooter), offers his services to Rigoletto. His sister Magdalen lures unsuspecting victims to their house where Sparafucile is able to dispose of them without risk. However, at the moment Rigoletto has no need of a hired assassin. He tells his daughter Gilda and the maid Giovanna not to trust strangers and to keep the door barred at all times, then he goes out. But with the complicity of Giovanna, a young man manages to get into the garden. It is the Duke of Mantua who, taking advantage of Rigoletto’s absence, pretends to Gilda that he is a poor student who is in love with her. When someone approaches, the Duke flees, but Gilda has already fallen in love with him and wants to see him again. Marullo arrives on the scene with the other courtiers, intent on abducting the girl they believe to be Rigoletto’s lover. Rigoletto discovers them, however they convince him that it is Ceprano’s daughter that they want to abduct, so the jester decides to help them. The courtiers get into the house to abduct Gilda and Rigoletto realizes too late that he has been cruelly tricked. Gilda is shut up in the Duke’s apartments. Meanwhile Rigoletto pretends to joke as he plots his revenge. When Gilda appears and tells him she has been seduced, Rigoletto swears he will kill the Duke. As Monterone is led away to the gallows, Rigoletto commissions Sparafucile to assassinate the Duke. Magdalen lures him to the tavern but finds him so charming that she persuades her brother not to kill the Duke, but the first person who knocks on the tavern door instead. They will still then have a body to deliver to Rigoletto. Gilda, who has secretly remained in Mantua in order to see the Duke again, discovers this plan and decides to sacrifice herself to save his life. Disguised as a man, she knocks on the door and Sparafucile stabs her. When Rigoletto receives the sack which ought, according to the terms of the deal, contain the body of the Duke, he hears a voice and opens the sack to find the body of his daughter who dies in his arms. Monterone’s curse has come true.
Show more Show less