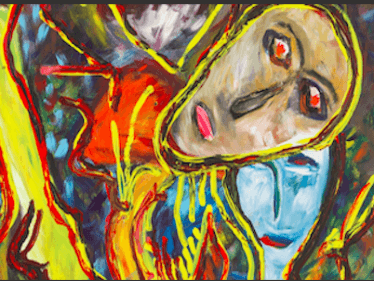 New production of the Theater an der Wien in the Kammeroper

The scholar Faust is tired of the fruitless pursuit of knowledge. In his desperation, he conjures the devil, who promptly appears in the form of Mephistos and conjures up for him the image of the beautiful Margaret. He promises Faust to rejuvenate him and lead him to the girl when he prescribes his soul. Faust agrees without hesitation. Mephisto then brings Faust to a party where soldiers say goodbye, including Valentin, he has to go to war. He recommends the protection of his friend Siebel to his sister Margaret. Mephisto drives his great jokes. When he publishes Margarethe in public, Valentin harasses him with a sword. In the meantime Faust has courted Margarethe in vain, but, overwhelmed by her appearance, has fled in love with her. The shy Siebel, who also loves Margarethe, wants to bring flowers to her, but she withers, devilishly bewitched. Instead, Mephisto puts precious jewelry in front of Margarethe's door. Even with her Faust left a tremendous impression. Her neighbor advises her to keep the jewelry. Now the opportunity has come for Faust. Mephisto lures away the talkative neighbor and leaves Faust with the young girl alone. The two confess their love for each other and Margarethe leaves fist secretly in her house. This has consequences: Margarethe becomes pregnant and Faust leaves her. At church, Margarethe pleads unsuccessfully for forgiveness for her sins. Meanwhile, the soldiers return home. Alarmed by Siebel's strange reports, Valentin Faust demands a duel, out of which, guided by Mephisto, he emerges victorious. Valentin curses his sister dying. After all, Faust wants to see the girl who had her son murdered in mental confusion sentenced to death and is now sitting in the dungeon once again. Full of remorse, he tries to persuade Margarethe to flee with him. But as she recognizes the devil in Mephisto and sees Valentine's blood on Faust's hands, she shudders away from them. Mephisto wants to triumph, but angels carry the lifeless to heaven and proclaim their salvation.