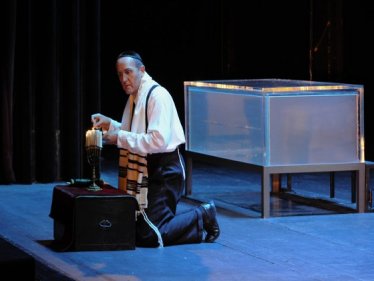 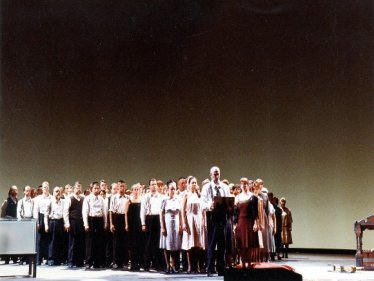 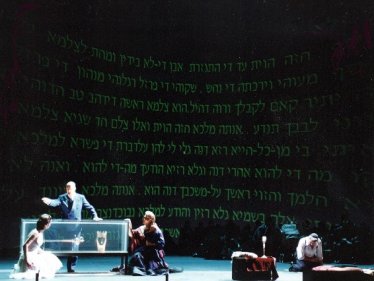 ACT I. In the Temple of Solomon in Jerusalem, the Israelites bewail their fate: Nabucco (Nebuchadnezzar), king of Assyria, has attacked them with his hordes and is desecrating the city. As they offer prayers, Zaccaria (Zacharius), their high priest, enters with his sister, Anna, and Nabucco's daughter, Fenena, whom the Jews hold hostage. He counsels his people to be steadfast, as peace is within their reach, and reassures them that the Lord will not forsake them. Ismaele, nephew of the king of Jerusalem and leader of the military, comes in with soldiers to say Nabucco is sweeping all before him. Zaccaria hopes for a miracle and turns Fenena over to Ismaele for safekeeping.

When the others leave, following a hymn, we learn that Ismaele and Fenena are in love, having met in Babylon when he served there as ambassador. Even then they had a difficult time, because her jealous sister, Abigaille, loved Ismaele too. As they talk, Abigaille bursts in wearing warrior garb and leading a band of Assyrians (disguised as Hebrew soldiers) to occupy the temple. She greets Ismaele with scorn, then privately tells him he can save his people and earn a new kingdom if he returns her love. Saying he cannot, he offers to forfeit his life for his people, while Fenena prays to the God of Israel to shield Ismaele. The Hebrew crowd reappears, frightened because Nabucco is approaching. As the conqueror enters the temple, Zaccaria confronts him, denouncing his blasphemous arrogance and threatening to stab Fenena. But Ismaele holds back Zaccaria's blow and delivers Fenena to her father. As Zaccaria and the other Jews revile Ismaele, Nabucco orders the temple looted and burned.

ACT II. In Nabucco's palace in Babylon, Abigaille has found a parchment that could cause her ruin, since it certifies that she is not Nabucco's daughter but the child of slaves. She swears vengeance on Nabucco and his appointed heiress, Fenena, but wistfully reflects that the love she felt for Ismaele could have changed her life. The High Priest of Baal comes to say that Fenena has freed the Hebrew prisoners. As a result of her treason, the religious authorities have decided to offer Abigaille the throne instead, telling the people that their king has fallen in battle. She rejoices that the daughter of slaves will now have everyone at her feet.

Elsewhere in the palace, Zaccaria prays for the ability to persuade the Assyrians to put aside their false idols. He will begin by converting Fenena, whose apartment he enters. Two Levites, sent for by Zaccaria, appear and are surpised to meet the outcast Ismaele. As they upbraid him, Zaccaria, accompanied by Fenena and Anna, pardons Ismaele, for he saved a fellow Hebrew-the newly converted Fenena. The aged palace adviser Abdallo rushes in to tell Fenena about the reports of the king's death and to warn that her life is in danger. Before she can escape, the High Priest of Baal, followed by Abigaille and the Assyrian populace, proclaims Abigaille ruler and pronounces a death sentence on the Hebrews. When Abigaille demands the royal scepter, Fenena refuses to yield it. At that moment, to the astonishment of all, Nabucco enters, takes the crown and places it on his own head. Everyone quakes in dread before the irate monarch, who announces he is not only king but god, having overthrown both Baal and Jehovah. As he tries to force Zaccaria and Fenena to prostrate themselves, lightning strikes him and knocks the crown from his head; it also renders him insane. Abigaille retrieves the crown.
Show more Show less