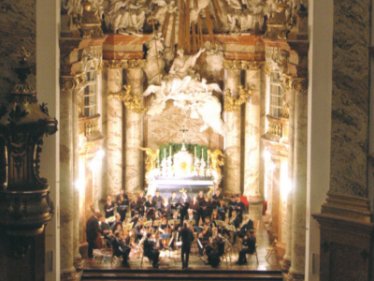 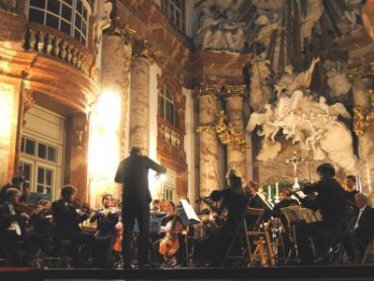 Mozart was commissioned by a mysterious "gray messenger" to compose a requiem in the early summer of 1791. This funerary mass was one of his most impressive works and was to be Mozart's last composition.Many legends and myths surround the Requiem - Mozart is said to be still at his deathbed with friends the moving "lacrimosa" have started. The performance in the Karlskirche with almost 40 musicians is based on the cast of the premiere. They experience concerts that match the ambience, sound and interpretation of Mozart's time. Mozart can hardly be experienced more authentically, profoundly and "real" in Vienna.

The majestic KARLSKIRCHE, one of the most impressive and important buildings in Vienna, towers just a few hundred meters from Mozart's place of death. Here since the Mozart Year 2006, the REQUIEM is performed on Saturdays. Performers are the Heinrich Biber Choir and the Orchestra 1756, which plays on so-called "historical instruments". More than 40 musicians create a performance that matches the cast, ambience and sound of the first performance at the time of Mozart. The Saturday performance of the Requiem in the Karlskirche has become a firm tradition of Viennese musical life.

ORCHESTRA 1756 & CHORUS CANTUS XVII
The ORCHESTER 1756 was founded in 2006 in Salzburg. Surprisingly, "Mozart's City" did not have an original sound ensemble dedicated primarily to the interpretation of Mozart's works on "historical instruments".
The use of these "original instruments", the intensive study of 18th century stylistics and rhetoric as well as well balanced ensembles based on historical specifications give rise to the special authentic-classical sound of this ensemble.How did a listener once notice? the original Mozart-Luft! "The orchestra 1756 creates permanent concert series in Salzburg and Vienna, especially the continuous rehearsal and concert activities in the Vienna Karlskirche lead to a uniformity and homogeneity rare in baroque orchestras.
Konstantin Hiller on "his" orchestra 1756: "Our game is characterized by the fact that there is no 70-percent-mode, but only 100 percent, which requires coherence and compactness - and we try to concentrate on every composition, every performance, to refocus every concert space and every mood, what we did in concert room A can sound quite different again in room B. "

Mozart can hardly be experienced in Vienna in a more authentic, in-depth and "real" way.