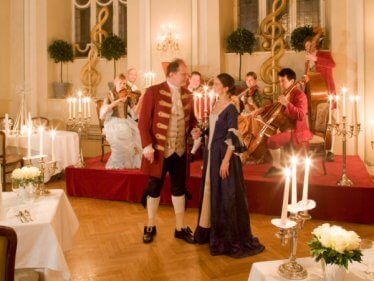 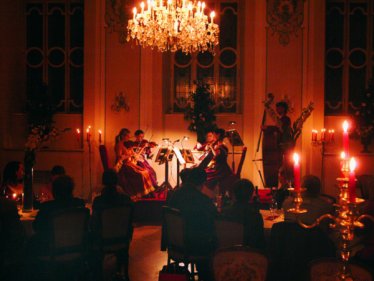 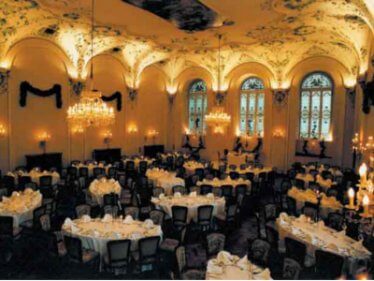 Concert & historical dinner in the baroque hall of the Stiftskulinarium St. Peter Salzburg

Experience an evening as it could have been in 1790: with the baroque hall bathed in candlelight, a menu based on historical recipes, artists in the clothes of Mozart's time and with the compositions of Wolfgang Amadeus Mozart, presented in the highest musical quality. Dinner and concert take place in the excellent acoustics of the historic baroque hall of St. Peter. This is easily accessible in the heart of Salzburg in the Stiftskulinarium St. Peter, which looks back on 1200 years of tradition and was first mentioned in a document in 803. The Mozart family also stopped here, as evidenced by an entry by Nannerl Mozart in her diary in 1783.
Today, the two opera singers and five instrumentalists of the AMADEUS CONSORT, which has existed since 1996, perform arias and duets from the great Mozart operas "The Magic Flute", "Don Giovanni" and "The Marriage of Figaro". The famous first movement from the serenade "A Little Night Music" completes the program. The dinner is interpreted in a modern way based on historical recipes from Mozart's time and consists of three courses. The concert will be in three parts after the courses of the dinner, the music should not be disturbed by feasting...
Each art form has its time.

AMADEUS CONSORT SALZBURG
Our ensemble plays with two opera singers (soprano and bass-baritone) and five instrumentalists. The members of the ensemble have graduated from various universities, above all from the Mozarteum in Salzburg, and work as professional musicians. The ensemble traveled abroad throughout Europe, as well as to Asia, Africa and America.
At the Mozart Dinner Concert, the ensemble impresses with its lively, scenic performance. Rarely are you so close to the action and become part of the performance.

The Mozart dinner consists of three courses. It is carefully prepared on the basis of recipes from Mozart's time, adapted to today's tastes.
Meals are served during the three concert breaks.


The dinner - inspired by historical recipes:

Original "Salzburg dumplings"
Sweet as love and light as snow

Vegetarians/vegans/allergy sufferers/young guests
Of course, we are happy to serve you a vegetarian menu and take allergy sufferers into consideration. Our vegetarian, vegan or anti-allergenic alternatives follow the seasons and vary seasonally. Please understand that we therefore do not offer a standardized vegetarian alternative to our Mozart menu. The chef loves to cook fresh! For our very young guests, we are happy to serve a children's menu tailored to their personal wishes. We are happy to accept your wishes after prior notification when reserving the tickets (at the latest at the beginning of the concert) and try to implement them as best as possible.

*In Mozart's time, "Capaun" referred to a castrated rooster. Nowadays we serve you the best supreme from Austrian corn chicken, which is very similar to the original in terms of quality and taste.