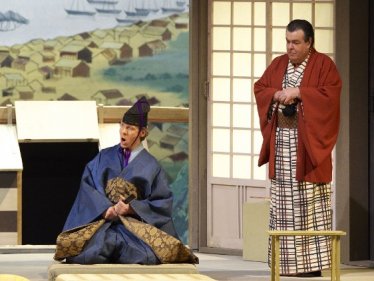 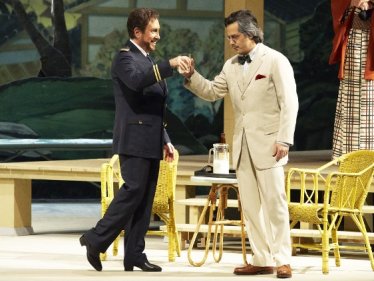 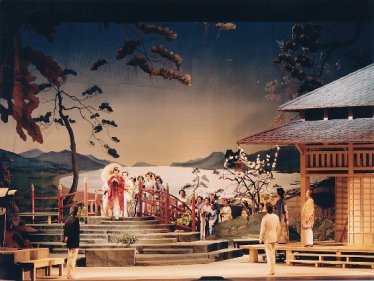 ACT I
A house on a hill overlooking Nagasaki Harbor
Lieutenant Benjamin Franklin Pinkerton of the US Navy is preparing to go through a form of marriage with a Japanese girl, Cio-Cio-San (Madama Butterfly). He is being shown over their future house by the marriage broker Goro, who has provided the house as well as the bride. They are joined by the American consul, Sharpless, and Pinkerton explains that both wedding contract and house lease are for 99 years, terminable at any time at short notice.

Pinkerton finds this arrangment very convenient, as his philosophy is that while wandering the world as an American sailor he is free to take up with girls from any port, but he will eventually settle down and marry a proper, American wife.

Disturbed by this creed, Sharpless tries to warn Pinkerton against hurting Butterfly. He is even more shocked when she arrives, accompanied by friends and relations, and reveals that, her father being dead, poverty has forced her to become a geisha, and that she is only 15. Butterfly shows Pinkerton the few possessions she is bringing with her, but shrinks from explaining one of them. Goro whispers that it is the dagger her father killed himself with, at the emperor´s order. She confesses that she has been to the mission, wishing to adopt her husband´s religion.

The wedding is performed, but the celebrations are interrupted by the arrival of Butterfly´s uncle, the Bonze (Buddhist priest), who denounces her for betraying the gods of her ancestors. Her family flees in horror. Butterfly is comforted by Pinkerton. Night falls and after an impassioned duet, they enter their new home.

ACT II
Inside Butterfly´s house, three years later
Butterfly, with almost no money left, is waiting faithfully for Pinkerton´s return in the company of her servant Suzuki. Sharpless arrives with a letter from Pinkerton asking him to break the news that he has married his American wife, and although his ship will soon be coming to Nagasaki, he does not intend to see Butterfly again.

Before Sharpless can begin she aks him when the robins nest in America. Her husband promised to return when the robins nested, but they have done so three times in Japan since he left, so she thinks that perhaps American robins have different habits.

At this Goro, eavesdropping, laughs and Butterfly complains that he is always hanging around, offering her new suitors. Even when one of these, the rich Prince Yamadori, arrives in person, she refuses to take him seriously. Goro explains to Sharpless that it would be better for her if she married again, but she still considers herself properly married to Pinkerton, according to American law. Sharpless tries to break the news about Pinkerton, but she keeps interrupting him with eager comments and questions and, beyond realising that Pinkerton is coming back to Japan, doesn´t take in the sense of the letter. Sharpless gives up and asks her what she would do if Pinkerton were never to return and she answers that she would choose to die. He tries to persuade her to marry Yamadori. She becomes angry, then shows him the child she has born to Pinkerton. Sharpless leaves, promising to tell Pinkerton of the child´s existence. Suzuki drags in Goro, who has been saying that no one knows who the baby´s father is. Butterfly is furious and attacks him with the dagger, but Suzuki calms her and he scuttles off.

The gun of the port is heard, denoting the arrival of a ship. Looking through a telescope, Butterfly sees that it is Pinkerton´s ship and makes joyful preparations to receive him. She and Suzuki decorate the house throughout with flowers, and, with the baby, prepare to wait through the night till he comes.

ACT III
The same, the next morning
At dawn, only Butterfly is still awake. Pinkerton has not come and she prepares to rest for a while. He arrives with Sharpless, but they warn Suzuki not to rouse Butterfly. Pinkerton is surprised that his arrival was expected and Sharpless reminds him that he had warned him three years ago that Butterfly was taking the ceremony seriously. Suzuki sees a strange woman in the garden. It is Pinkerton´s wife, Kate. They tell Suzuki that she must find a way of breaking the news to Butterfly, adding that Kate is willing to take the baby back to America, as the best thing for him.

Pinkerton is overcome with remorse, but Sharpless tells him to leave, as it will be easier to break the news if he is not there. Butterfly runs eagerly out of the bedroom, expecting Pinkerton, but seeing only Kate. She forces the truth from the reluctant Suzuki. Broken-hearted, she realises that a further blow is in store, understanding that she is being asked to part with her child. For his good, she consents, but says that Pinkerton must come himself in half an hour to take him. Sharpless and Kate leave and Butterfly sends the reluctant Suzuki (who understands what she intends) to play with the child.

As Butterfly prepares to commit ritual suicide with her father´s dagger, Suzuki pushes the child into the room, hoping to distract her, but she bids him a passionate farewell, blindfolds him and stabs herself, dying at Pinkerton´s feet when he rushes in the door calling her name.
Show more Show less