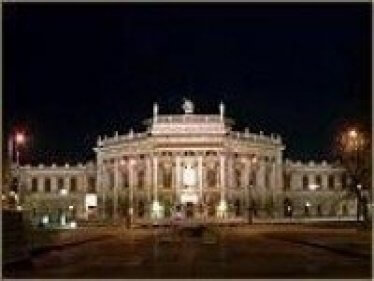 At the beginning there is a prophecy: Three witches prophesy to the triumphal returning from the battle general Macbeth, that he will once become king of Scotland - and his comrade Banquo progenitor of a royal family. Lady Macbeth, whose sinister ambition surpasses that of her husband considerably, hears of the witch's oracle and promptly devises a murder plan: Macbeth kills the sleeping king, whereupon his guilty conscience drives him to sleep. After the sons of King Malcolm and Donalbain - suspicious and publicly suspected by Macbeth of the patricide - have left the country, the killer actually crowns himself King of Scotland. And the killing continues: Macbeth has Banquo killed by three hired killers, but his spirit returns, at the big banquet, only visible to Macbeth. The witches warn him about Macduff, who fled to England. The family of the nobleman is therefore eliminated. But the more unflinching Macbeth gets in his bloodlust, the more the façade of his wife crumbles. Shortly before the decisive battle, his suicide is reported to him. The English attack, Macduff slays Macbeth, Malcolm king of Scotland.

The "Scottish play", as it is called superstitious in the theater world, is by far Shakespeare's shortest tragedy - and at the same time one of the largest. The director Antú Romero Nunes, last season's impressive text and plot of the antique trilogy The Oresteia has condensed, will recount Shakespeare's nightmare infused with Elizabethan scary effects with three actors.

"a poor player", Macbeth Act 5, Scene 5
Three actors in one play with nearly 30 roles? In Shakespeare's footsteps, the production attempts to exploit the possibilities of infinite transformations. Three actors play with fixed role models, change identities and still remain recognizable. As figures of the drama, as humans.