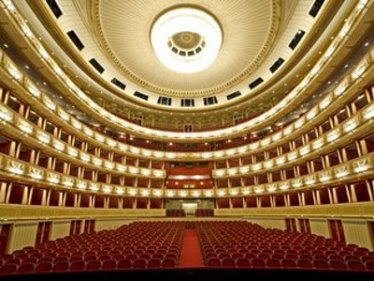 On 29 July 1977, members of the NASA team attached the record sleeve of the first „Voyager Golden Record“ to the space probe of the same name. One of the pieces of music on the record is the „Sacrificial Dance“ movement (lasting 4 minutes and 35 seconds) from „Le Sacre du printemps“ conducted by the composer himself, Igor Stravinsky (1882 to 1971); this was also the only recording of ballet music which was selected for the „Voyager“ programme.

In 1911/1912 (i.e. close to the period in which „Le Sacre du printemps“ was composed) Stravinsky also wrote the cantata „Le Roi des étoiles“, the title of which – against the background of the „Voyager“ project – appears almost prophetic.

In view of the scandal that broke out in 1913 around the first performance of „Sacre“ in Paris, surely nobody could have imagined that 64 years later it would be this particular work that would fly off to the stars as a messenger for the human race.

Maybe „Voyager“ actually crossed the path of (514) „Armida“, an asteroid in the so-called “main belt”, which is a collection of asteroids or dwarf planets located between the planetary orbits of Mars and Jupiter.

Certainly they were also “stars and starlets” of the ballet, those members of the epochal Ballets Russes who lent their own special radiance and legendary character to the two works in this performance. It is these dancers that John Neumeier evokes in his interpretation of „Le Pavillon d’Armide“ in a dialogue between past and present. Revisiting the past is also the theme of „Le Sacre du printemps“, in which circadian and circannual rhythms, in the alternation between day and night and the changing of the seasons, define a work which in many respects is truly polyrhythmic.

The “thrust reversal” that took place at the beginning of the modern period remains a remarkable phenomenon: the classical romantic ballet of the 19th century was always striving upwards, seeking with light feet to escape from the force of gravity. „Le Pavillon d’Armide“, first performed in 1907 in St. Petersburg, was a late witness to this endeavour. It was precisely in the decades when mankind was really starting to conquer the skies and then to reach for the stars, that dance – a mere six years later, with the „Adoration of the Earth“, as the first part of „Sacre“ is named – reverted to the ideal of striving downwards to the body’s centre of gravity, and thus to an aesthetic of movement which in its own way was to have a marked effect on the further course of dancing history.

If in around 40,000 years’ time „Voyager 1“ passes the star „Gliese 445“, it will certainly have long since used up all its fuel. The archetypical forces of „Sacre“, however, should have survived the course of time, sealed in gold, and should continue to exert their undiminished power, ready to engage with new worlds. Then – if not before – „Sacre“ will surely have taken a step in the direction of eternity, into a flourishing realm that lies beyond oblivion.