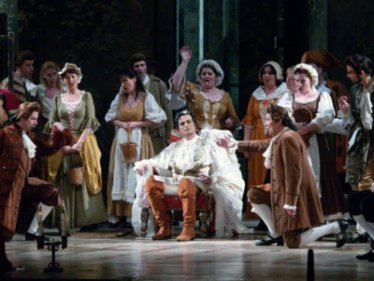 Comic opera in two parts, in Italian with Hungarian and English surtitles

Owing to financial problems, Title Character is compelled to marry his own long-lost mother, while the Count also has designs on said man’s lady. The Countess has relations with the page, Cherubino, who in turn makes out with the gardener’s wife, but the gardener has it in for the page after finding him leaping onto his flower bed in ladies’ clothing. A comic opera in which someone is always either in disguise, hiding, or otherwise being mistaken for somebody else.

ACT I
Figaro - he has given up his barber's shop to become Almaviva's personal servant, and today he is to marry Susanna, Countess Almaviva's chambermaid. The Count has obligingly given them married quarters in the room connecting his bedroom and the Countess'. Everybody in the castle except Figaro knows that the Count, who has grown tired of Rosina, and of pursuing the village girls for that matter, now fancies Susanna. Hence the convenience of the bedroom arrangements. Susanna intends to outwit this plan, and hastens to put Figaro in the picture. Dr. Bartolo, the old lawyer, has never forgiven Figaro for defeating him in the battle over Rosina. He is giving lethal advice to Marcellina, his housekeeper who owns a written promise of marriage her by Figaro as security for a loan, and who therefore has an interest in the forthcoming wedding. Bartolo's advice is to ensure that Susanna repulses the Count's advances; he will then take Marcellina's side in a breach of promise case, and they will be revenged on Figaro. Marcellina has a brief catfight with Susanna, and then departs. Susanna's next visitor is Cherubino, a noble-born youth who has been cent to court as a sort of finishing school, but has chiefly been learning about women, and is always rousing the righteous (i.e. jealous) wrath of the Count. So that when the Count walks in to make up to Susanna, Cherubino has to hide behind a convenient nursing-chair. Almost at once the singing master Don Basilio comes to share the latest castle gossip with Susanna. Count Almaviva dodges behind the chair, and Cherubino dodges round into it. Susanna covers him with a cloak. Basilio's scandal about Cherubino infuriates the Count who leaves his hiding-place and, by mischance, discovers Cherubino. The page is hastily ordered to leave the castle and to up a commission in the Almaviva regiment; Figaro gives the boy some last-minute advice about military life.

ACT II
Countess Almaviva is sensitively aware of her position as wife to a notorious womanizer. But she is in the plot with Susanna, out with Figaro who proposes to embarrass Almaviva by rigging a double rendezvous. This will involve disguising Cherubino as a girl. Susanna gives the boy a dress rehearsal (he is still hanging about the castle) in the Countess' bedroom. Unfortunately the Count arrives, and Cherubino has to be hidden in the wardrobe. The worst is suspected but Susanna and Figaro manage to get the better of their matter, not with standing the drunken old gardener, Susanna's uncle Antonio, who firmly insists he has seen Cherubino. When all seems explained and Almaviva has begged his wife's pardon. Marcellina bursts in with Bartolo and Basilio and demands a break-of-promise trial. The Count is delighted to consent.

ACT III
The Count makes a rendezvous with Susanna for that night, though he overhears what she is plotting with Figaro. The litigants assemble and the Count supports the stammering notary, Don Curzio, in the judgement that Figaro must either repay Marcellina's loan or marry her. Figaro explains in evidence that he is a foundling of gentle birth, and Marcellina eventually discovers that she is his mother and Bartolo his father. They decide to celebrate a double wedding. The Countess and Susanna concoct a love letter from Susanna to the Count. Now the village girls led by the gardener's daughter Barbarina come to serenade the Countess. One of the 'girls' is recognized to be Cherubino in skirts, but Barbarina persuades the Count to let her marry the boy. The act ends with the double wedding as proposed.

ACT IV
Now we are in the garden, where the complication of lover's meetings is due to occur. Figaro suspects his wife of cuckolding him. But Susanna and the Countess exchange clothes, and in the end it is the Countess whom Cherubino and then the Count make violent love to, supposing her to be Susanna; and the lady whom the Count catches in a compromising situation with Figaro is not the Countess but Susanna in disguise. Almaviva has again to beg his wife's pardon, and everything ends happily.