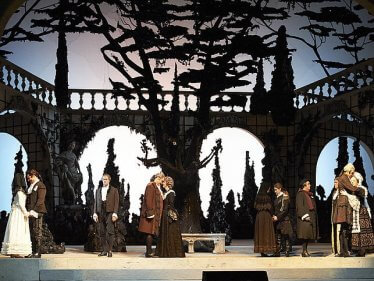 Wolfgang Amadeus Mozart's and Lorenzo Da Ponte's collaboration is one of the greatest strokes of luck in the history of theatre. As a model for their first joint opera, they chose Beaumarchais' comedy The Marriage of Figaro, which was banned by the emperor in Vienna. For this reason, they concealed the revolutionary explosive power of the subject matter, but in return they delved all the more deeply into the characters' souls and gave the gender relations a significance that went far beyond the original. Two plot lines intersect: Count Almaviva's attempt to make Susanna, the fiancé of his valet, Figaro, his lover, and the Countess's attempt to win back the love of her unfaithful husband. While Le nozze di Figaro did not survive for long after its premiere at the old Vienna Burgtheater in 1786, the work is without doubt one of the most frequently performed operas in the world today. After a ten-year hiatus, Jean-Pierre Ponnelle's detailed production, which is set in the pre-revolutionary period and has shaped the work for many decades, is now being put up for discussion again. At the podium is music director Philippe Jordan, who has been associated with Le nozze di Figaro for many years. Beginning with this work, he and a young and internationally aspiring generation of singers will take up anew the idea of a Vienna Mozart ensemble with a worldwide reputation, an idea that was often conjured up and which flourished in the post-war period.