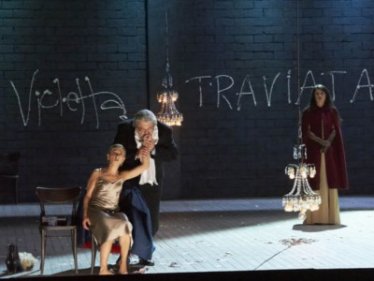 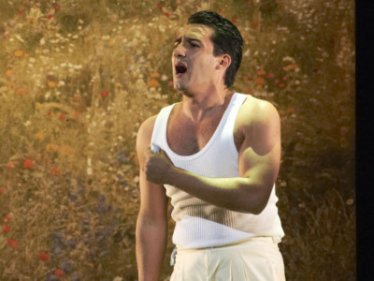 Violetta Valéry, the radiant center of the Parisian Demimonde, is - after an illness seemingly recovered - a feast in her house, in which many gentlemen of the good company are present. One of the band of their admirers, Gaston, introduces his friend Alfred Germont, in whom the courted woman made a deep impression, into their salon. In her honor, Alfred praises love in a drinking song. Violetta is committed to the carefree enjoyment of life. However, when she asks society to dance, she suffers a sudden fainting fit.

Alfred confesses her love now. Violetta, who does not dare to believe in real feelings, is deeply moved by his words. Although she warns him first, only friendship, not to be able to afford love, but then a camellia flower and then indicates to him: If this is dead, he should come back. Society returns from the dance and says goodbye. Violetta stays alone and thinks about her previous life. Should she change it? Her emotions fluctuate: inwardly she still fights her growing passion for Alfred, whose confession of love she hears in a trance.

For three months, Violetta and Alfred live in a country house full of their love. Through the servant Annina, who has returned from Paris, Alfred learns that Violetta was forced to sell her possessions in order to share the proceeds with the household. Alfred wants to go to Paris to provide the necessary funds.

Violetta receives a letter from her friend Flora inviting her to a ball. There is a stranger reported. It is Alfred's father, Giorgio Germont, who accuses Violetta of seducing his son. She discovers to her father that she has already sacrificed everything she possessed; her past was extinguished by her love for Alfred. However, his father, caught in social conventions, calls for a greater sacrifice: The happiness of his daughter, Alfred's sister, is at stake, whose bridegroom withdraws from the betrothal if Alfred does not break the bond with Violetta and thereby the reputation of the Save the family. Painfully struck, Violetta can be used to renounce the lover. In a letter to Alfred, she indicates her unfaithfulness to make it easier for him to part with. Alfred hits this news like lightning. The father does not manage to appoint the son to return home. Alfred finds the invitation Floras. That adds to his jealousy. At Floras Fest he wants to take revenge for the supposed shame.

A spanish mask festival in the house of Floras. The guests are appropriately costumed. A Spanish troupe shows their arts.

During the festivity Alfred appears. Violetta enters the hall on the arm of Baron Douphol. Alfred, winning more and more of the cards, tempts the hated rival to gamble. Violetta warns Alfred before the baron, as she fears a duel. In order not to break her father's word given to Alfred, she declares that she left Alfred for the love of Baron. In his delusion, in the presence of all of this, he throws his lover at his feet as a "payment". Shocked sees his father, who wants to undo this insult and Alfred tries to lead away, what injustice must endure the despised, which must not reveal their true love.

Violetta, whose financial resources have been used up, suffers, physically and mentally broken. The doctor sees no more rescue: The lung disease Violetta is incurable. A letter from Alfred's father, who has since matured humanely and recognized his mistakes, gives her assurance that the beloved now knows what a great sacrifice she has made him.

Then her life flares up again. She believes in her recovery when Alfred closes her arms. But this is only a happy moment, because she senses that death is inevitable. Even Alfred's father, who wants to record Violetta as his daughter, comes too late ...