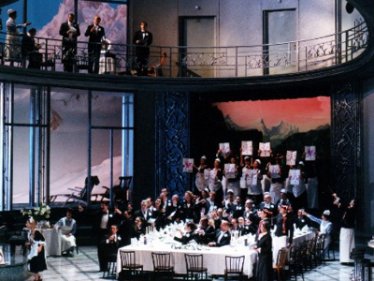 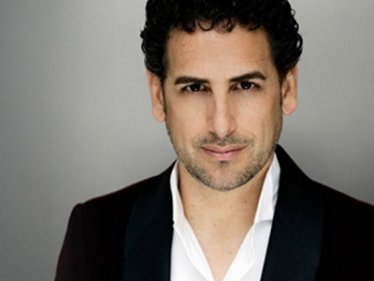 Act I
Aminas´s upcoming wedding with Elvino is being celebrated. Only Lisa, Elvino´s former lover, is sad. She does not want to resign herself to the new admirer Alessio.
During the engagement ceremony Elvino slips the ring of his recently deceased mother on to Amina´s finger.
A stranger arrives. It is Count Rodolfo, who originally comes from the region, but nobody recognises him. He notices Amina and starts complimenting her, thus provoking Elvino´s jealousy. Amina´s foster mother Teresa finally breaks up the gathering by warning from a dreaded phantom who haunts the area at night. Amina soothes Elvino´s jealousy.

Lisa, having guessed the Count´s real identity, courts him, trying to get his attention. This is when Amina enters the room sleepwalking, she is longing for Elvino. The Count forces himself not to abuse from the situation with the lovely, half-dressed young woman. But Lisa calls Elvino; when he finds Amina sleeping, wrapped in Rodolfo´s coat, the situation seems obvious to him. It is Teresa alone who comforts abandoned and desperate Amina.

Elvino buries himself in his pain. Amina´s protestation of her innocence is in vain; Elvino takes the ring from her finger and breaks off the engagement.
Lisa already sees herself as Elvino´s new bride. Rodolfo tries to rectify the wrong suspicions, explaining that Amina was sleepwalking and that she is not guilty of any wrongdoing. But he cannot convince Elvino. When Teresa finds out about Elvino´s new wedding plans, she reveals what she saw happening between Lisa and Rodolfo the night before. Elvino believes that he has also been betrayed by the second bride.
While Count Rodolfo tries to save the situation by protesting Amina´s innocence, she appears again sleepwalking. When Elvino sees her in this state, he understands how the equivocal situation could arise the evening before. He embraces her again as his bride and Amina sings about her bliss.
Show more Show less