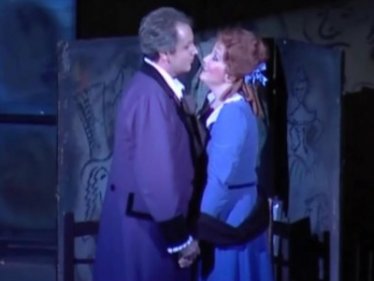 ACT I.
Paris, Christmas Eve, c. 1830. In their Latin Quarter garret, the painter Marcello and poet Rodolfo try to keep warm by burning pages from Rodolfo´s latest drama. They are joined by their comrades  Colline, a young philosopher, and Schaunard, a musician who has landed a job and brings food, fuel and funds. But while they celebrate their unexpected fortune, the landlord, Benoit, arrives to collect the rent. Plying the older man with wine, they urge him to tell of his flirtations, then throw him out in mock indignation. As the friends depart for a celebration at the nearby Café Momus, Rodolfo promises to join them soon, staying behind to finish writing an article. There is another knock: a neighbor, Mimì, says her candle has gone out on the drafty stairs. Offering her wine when she feels faint, Rodolfo relights her candle and helps her to the door. Mimì realizes she has dropped her key, and as the two search for it, both candles are blown out. In the moonlight the poet takes the girl´s shivering hand, telling her his dreams. She then recounts her solitary life, embroidering flowers and waiting for spring. Drawn to each other, Mimì and Rodolfo leave for the café.

ACT II.
Amid shouts of street hawkers, Rodolfo buys Mimì a bonnet near the Café Momus before introducing her to his friends. They all sit down and order supper. A toy vendor, Parpignol, passes by, besieged by children. Marcello´s former lover, Musetta, enters ostentatiously on the arm of the elderly, wealthy Alcindoro. Trying to regain the painter´s attention, she sings a waltz about her popularity. Complaining that her shoe pinches, Musetta sends Alcindoro to fetch a new pair, then falls into Marcello´s arms. Joining a group of marching soldiers, the Bohemians leave Alcindoro to face the bill when he returns.

ACT III.
At dawn on the snowy outskirts of Paris, a Customs Officer admits farm women to the city. Musetta and revelers are heard inside a tavern. Soon Mimì walks by, searching for the place where the reunited Marcello and Musetta now live. When the painter emerges, she pours out her distress over Rodolfo´s incessant jealousy. It is best they part, she says. Rodolfo, who has been asleep in the tavern, is heard, and Mimì hides; Marcello thinks she has left. The poet tells Marcello he wants to separate from his fickle sweetheart. Pressed further, he breaks down, saying Mimì is dying; her ill health can only worsen in the poverty they share. Overcome, Mimì stumbles forward to bid her lover farewell as Marcello runs back into the tavern to investigate Musetta´s raucous laughter. While Mimì and Rodolfo recall their happiness, Musetta quarrels with Marcello. The painter and his mistress part in fury, but Mimì and Rodolfo decide to stay together until spring.

ACT IV.
Some months later, Rodolfo and Marcello lament their loneliness in the garret. Colline and Schaunard bring a meager meal. The four stage a dance, which turns into a mock fight. The merrymaking is ended when Musetta bursts in, saying Mimì is downstairs, too weak to climb up. As Rodolfo runs to her, Musetta tells how Mimì has begged to be taken to her lover to die. While Mimì is made comfortable, Marcello goes with Musetta to sell her earrings for medicine, and Colline leaves to pawn his cherished overcoat. Alone, Mimì and Rodolfo recall their first days together, but she is seized with coughing. When the others return, Musetta gives Mimì a muff to warm her hands and prays for her life. Mimì dies quietly, and when Schaunard discovers she is dead, Rodolfo runs to her side, calling her name.
Show more Show less