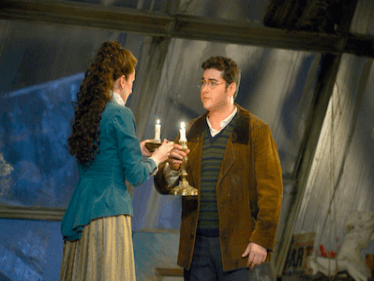 Puccini had already proved to be an ingenious musical colorist with EDGAR [1889] and with MANON LESCAUT, but it was only with LA BOHÈME that the correspondence between the material and its musical arrangement was reached, of which Claude Debussy raved: "I do not know anybody who knows Paris described this time as well as Puccini in LA BOHÈME «. Puccini's impressionistic sound technology combines subjective feeling with objective tone painting. Tonmalerische elements, musical descriptions of the ambient, effective musical local color spread their magic from the first image when Rodolfo and Marcello burn the drama manuscript or when the poet of the unconscious Mimì wets his face with drops of water, if in the second image of the choir as a crowd with The stage orchestra used for the military parade is contrasted when the atmosphere of a cold winter morning emerges in the third picture with sparing, selected musical means.

On a chilly Christmas day in a Parisian rooftop studio try Rodolfo, the writer and Marcello, the painter to work. They are starving, have no fuel for their stove and no money for the rent. Colline, the philosopher, wanted to bring books to the pawnshop and comes back home without doing anything. The musician Schaunard was luckier, bringing food, firewood, cigars and money. Friends go to Café Momus, only Rodolfo wants to work. He is disturbed by a neighbor who asks for light, suffers a fainting fit and loses her apartment key. This is how Rodolfo falls in love with Mimì, the embroiderer who is terminally ill with tuberculosis. Two months later, he abandons her because he can not stand watching helplessly as Mimì's illness worsens in his miserable cold dwelling. Six months later, Musetta, long-time Marcello's lover, returns Mimì to terminal illness. Musetta gives her earrings to buy medicine, Colline gives his coat. Mimì is grateful and happy. Rodolfo thinks she has fallen into a wholesome sleep. But Mimì is dead.

LA BOHÈME has a dramaturgical relationship with an experiment that has remained without repetition in Puccini's oeuvre: From the relaxed episodes of Louis Henri Murger's novel, the two librettists Illica and Giacosa have formed a libretto whose artistic maxim was the persons and the ambience of the novel, on the other hand, to exercise freedom in the selection and treatment of the episodes. They did not divide their textbook into nudes, but into pictures that are held together only by the volume of the love story between Rodolfo and Mimì. A counterpoint to this is the relationship between Musetta and Marcello.
"Just as LA BOHÈME always addresses and challenges the most personal - intellectual snobbers and frustrated Beckmesser should avoid the opera! - I can only add in a very personal way: In the space of thirty years, the longing has grown to trace the hopes and disappointments, dreams and pains of youth and to reconstruct them in the game, shaped to image, action and sound. Thus the new encounter with this work becomes an expression of the longing for one's own youth. I think this is the open secret of the still lively topicality of Puccini's LA BOHÈME. "[Götz Friedrich 1988]