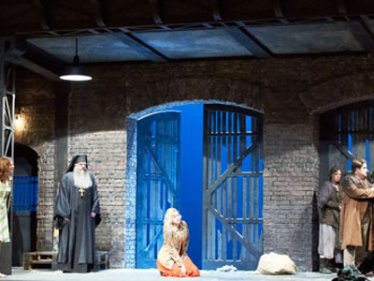 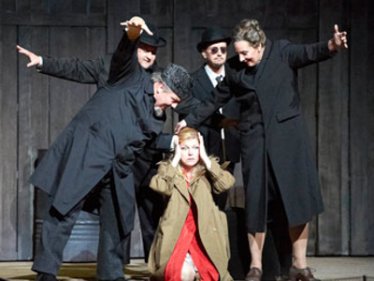 The young chemist Kudrjáš is enthusing to the servant Glaša about the River Volga and the beauty of Nature in general. Their conversation is abruptly interrupted when the businessman Dikoj and his nephew Boris appear. The angry Dikoj’s rude and noisy scolding of his nephew – whom he considers a lazy good-for-nothing – is in stark contrast to the educated and sophisticated Kudrjáš’s euphoric appreciation of Nature. For his part, Kudrjáš cannot understand why Boris stays with his primitive and brutal uncle despite the rough treatment meted out to him. However, a short time later Boris readily reveals the reasons for this to him. Their parents met with an early death, and he and his sister will receive their inheritance when they come of age only if they get on with Dikoj. Boris is therefore obliged to endure his uncle’s maltreatment. Glad to have finally found someone to whom he can freely speak his mind, Boris reveals yet another secret to the astonished Kudrjáš: he feels irresistibly attracted to Kátja Kabanová, a married woman.
However, there is something Boris, as yet, is unaware of: she reciprocates his affections. Ever since her marriage, Kátja has lived under the same roof as her weak-willed, alcoholic husband Tichon and his authoritarian and bigoted mother Kabanicha. And only Varvara, the Kabanovs’ foster daughter, sympathises with Kátja, who suffers greatly from her mother-in-law’s insults and reproaches. Kabanicha dotes on her son, and sees her influence over Tichon vanishing since his marriage with her insufferable daughter-in-law. She therefore tries to humiliate Kátja at every conceivable opportunity.
In a confidential tête-à-tête, Varvara tells Kátja about her child-hood, her religious ecstasy – and about her yearning for another man, Boris, which she admits is sinful. Shortly afterwards, when Tichon comes to take leave of his wife to embark on a lengthy journey which Kabanicha has sent him on, Kátja begs to be allowed to travel with him. Distraught, she fears she may succumb to her yearning for Boris during her husband’s absence. But she is obliged to stay at home with her bickering mother-in-law.

Kabanicha continually reproaches Katja after Tichon´s departure. In this oppressive atmosphere, she feels her resistance to her feelings for Boris weakening. When Varvara then gives her a key that will enable her to leave the house unnoticed, she realizes she is done for. When Kabanicha takes the drunken Dikoj in for the night and her mother-in-law is distracted, Katja sets off to see Boris. Like Varvara and Kudrjaš, Katja and Boris also spend the next few hours together before the two young women are obliged to return home – Katja is tormented by her conscience.

One afternoon, two weeks later. Kudrjaš and his friend Kuligin seek shelter from a thunderstorm in a deserted building. Before long other people also find shelter there – including Dikoj, who very soon becomes embroiled in a lively altercation with Kudrjaš. In contrast to Kudrjaš, who tries to explain the physical reasons for the development of a thunderstorm, Dikoj regards thunder and lightning only as a reminder of God´s power.
Varvara and Boris also arrive. However, their conversation is not about the cause of thunderstorms, but about the physical state of Katja, who appears to have lost her mind since Tichon´s early return. When Katja approaches accompanied by her husband and mother-in-law, her disturbed mental state becomes apparent to the gathering. Fearful of the fires of hell and tormented by qualms of conscience, she wails and weeps continually. After a particularly violent peal of thunder, she falls to her knees and loudly admits her guilty secret to Kabanicha and Tichon: she has spent ten nights with Boris. After making this confession, she rushes out into the raging thunderstorm alone.
A few days later, Kudrjaš and Varvara resolve to flee their oppressive village life. Things are different for Katja: her only hope and succour, he beloved Boris, has been sent to a distant trading post by his uncle Dikoj, where she cannot be with him. At their last meeting together, the two lovers take leave of one another. Barely has Boris left than Katja plunges into the nearby river. From a distance, Kuligin has seen someone jumping into the river, and hastily summons help. However, all attempts at rescue are in vain: they are only able to recover Katja´s dead body. Only now does Tichon dare to stand up to his mother, saying “It was I who killed her.” True to form, his mother thanks everyone for their sympathy.