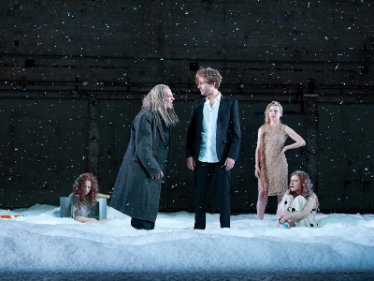 John Gabriel Borkman has barricaded himself in the attic of his house. He has to realize what he has left of his financial empire. Crashed after a legendary rise and punished for unscrupulous fraud with eight years imprisonment, the banker is ruined, his reputation is in ruins, his family is completely divided. Only his son could restore the father's reputation.

For Simon Stone, Henrik Ibsen's play is the most important work of modern classical music to be reinterpreted in the Europe of the financial crisis. The young Australian director's interpretation is based on Ibsen's well-known realism and drives the scenic action into the features of early Expressionism that are already apparent in the play. Ibsen's precise design - the search for meaning by John Gabriel Borkman, who believed in money's all-embracing power - culminates in this interpretation in a desperate power struggle of the family for their only remaining hope: Borkman's son. Simon Stone examines the fault lines of current upheavals in the value canon of bourgeois Europe after the biggest financial debacle on the continent.

A coproduction with the Wiener Festwochen and the Theater Basel

Awards:
Staging of the year 2016 in the critics poll of "Theater heute"
Invited to the Berliner Theatertreffen 2016
Awarded three times with the NESTROY Theater Prize 2015: Martin Wuttke was honored with the Nestroy in the category "Best Actor", Roland Koch for the "Best Supporting Role" and director Simone Stone for the "Best Director".

For artistic reasons it will be smoked on stage.