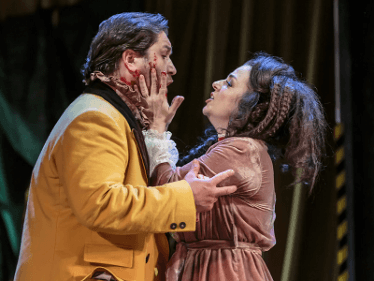 The last moments of the great rebel

In Italian, subtitles in Czech, English

If you were looking for places where Mozart himself premiered one of his operas and still exist as a theatre, the Estates Theater in Prague would be the only one in the world! The National Theater Opera has proudly maintained this unique tradition for decades.
Surprisingly, Don Giovanni, the “opera of operas” created for Prague, has never been staged at the National Theater by a non-Czech director.
Accordingly, the new production in the unique Estates Theater actually contradicts the long tradition - this time an adaptation of Don Giovanni is being created by the Swedish-Norwegian director Alexander Mørk-Eidem together with the German conductor and Mozart specialist Karsten Januschke. They are given plenty of scope to portray the world-famous seducer who so easily attracts women and wins their hearts. Is Giovanni an incorrigible slave to his drives, or is he a provocateur, rebel, even revolutionary, or is he just a catalyst around which Mozart depicts the ever-changing universe of female emotions?
To what extent will the new Don Giovanni at the Estates Theater break with tradition in this respect?

Co-production with the Nationaltheater Mannheim.