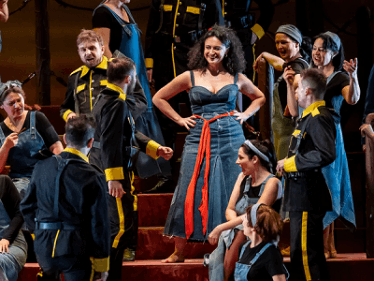 Keep your distance when Carmen is in the mood for love...

In French, subtitles in Czech, English

Bizet's Carmen is an integral part of the repertoire of most opera houses around the world. The opera is extremely popular due to the music, rich in rousing rhythms, captivating melodies and enchanting songs of the beautiful Carmen, as well as the overwhelming power of the passions portrayed in the story.

Carmen is in fact one of the first verismo operas, predating the 'Manifesto' of the Italian art movement. Her style and the death of the titular heroine, at odds with the established conventions of the Opéra Comique, seem to have been the reason why the work failed to arouse much public enthusiasm at and after its premiere in Paris in 1875. However, Carmen soon triumphed in other European cities.

Carmen was first performed at the Estates Theater in Prague in 1880. The National Theater performed it on January 3, 1884, shortly after its opening, as the first foreign opera ever. In our new production, German director Grischa Asagaroff tells the story of Don José, a soldier who falls madly in love with Carmen. The musical production was taken over by Petr Popelka, chief conductor of the Norwegian Radio Orchestra and principal guest conductor of the Janáček Philharmonic in Ostrava.