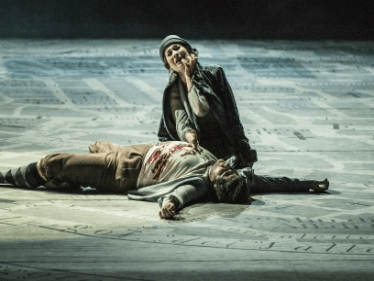 In 1889, Puccini saw in Florence a performance of La Tosca, an acclaimed play by the French author Victorien Sardou, an engrossing melodrama about love and hate, passion and death, against the backdrop of political intrigues and the struggle for freedom and independence, written for the famous actress Sarah Bernhardt, who, according to the period testimonies, dazzled in the lead role. Even though the critics castigated Sardou’s play for containing excessive violence, the audience loved it, and Puccini was no exception. The premiere of the opera, on 14 January 1900 at the Teatro Costanzi in Rome, was a resounding success. Although some scorned it, including Gustav Mahler, who refused to conduct it, referring to the work as a “Meistermachwerk” (sham masterpiece), and Richard Strauss, who dismissed it in even harsher terms, the opera was admired by Claude Debussy, Igor Stravinsky and Arnold Schönberg. Today, the opera-thriller about the diva Tosca, her lover, the painter Cavaradossi, and the malicious police chief Baron Scarpia, set in 1800 in Rome during the time of Napoleonic wars, is one of the most popular operas worldwide. Puccini’s Tosca was first staged in Bohemia by the National Theatre in Prague, on 21 November 1903. The next year, on 8 September 1904, the opera was performed at the New German Theatre and has ever since been a permanent part of the repertoire on the stage of what is now the State Opera. The most recent production, premiered on 7 June 1999 at the State Opera Prague, revitalised Josef Svoboda’s legendary sets dating from the period of the Fifth of May Grand Opera (1947). The renowned French director Arnaud Bernard has been invited to stage the new production of Tosca.