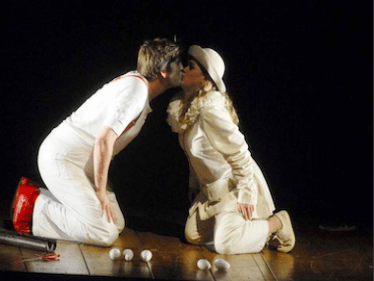 Prince Tamino is threatened by a wild dragon. At the last minute, three mysterious women, emissaries of the Queen of the Night, rescue him. When the birdcatcher Papageno shows up and boasts of heroic deeds, they punish him. They give the prince a picture of Pamina, daughter of the Queen, who is imprisoned by the ruler of the Sun Temple, Sarastro. Tamino falls in love with her. The queen herself appears and orders him to rescue Pamina together with Papageno. A magic flute to protect him from dangers, the reluctant Papageno receives a magical carillon. Led by three boys, the two make their way to Sarastro's castle. While Tamino is twice rejected by the Burghers and taught the third time that Sarastro is not the cruel despot that the queen put him down to, Papageno finds Pamina and tries to escape with her. Although he can keep his guard Monostatos at bay with the aid of the carillon, the appearance of Sarastro destroys all effort. Papageno, Pamina and Tamino must stay in Sarastro's temple. You will be asked to take life-threatening examinations. First, they have to learn to be silent, an especially difficult task for Papageno. When an old woman comes along, he can not stand it anymore and asks her name. She disappears again with a thunderclap. Papageno consoles himself with food and drink, which are miraculously served to the two, only Tamino is silent and plays on his flute. Pamina comes and is desperate because Tamino is not talking to her anymore. Her mother had previously tried in vain to persuade her to murder Sarastro. When she wants to put an end to her life, the three boys snatch her the dagger and lead her to Tamino. Both pass through, protected by the flute, fire and water, and thus have passed all the tests. In the meantime Papageno, in his loneliness, wishes the old woman back and promises her, "as long as there is nothing better," to marry her. Then she suddenly turns into a young, beautiful girl, but the time has not yet come, she is wrested from him again. He desperately wants to kill himself, but the three boys remind him of the carillon. His sound calls for Papagena, and both dream of a happy future. The other couple are also happy: Tamino and Pamina are taken into the community of the initiated and glorify the ideals of nature, wisdom, reason. Only the Queen of the Night comes to a bad end: As she tries to invade the temple with her retinue, she is devoured by the forces of darkness.

Mozart's ZAUBERFLÖTE, the most-performed opera in the German-speaking world, the multi-layered masterpiece in the unusual mixture of Viennese folk theater and Masonic mystery, fairy tales and myths still leaves us enigmatic: Did Mozart and his librettist Schikaneder change sides in the middle of the work between the Queen of Night and Sarastro? Is not there mistrust of the overly healed priestly world and its ideology, which divides the world into good and evil? Are not there even traces of a distance between text and music, as some Mozart specialists suspect? Nevertheless, it is precisely the music that raises the contradictions of action into the world. She does not denounce her characters, but gives their conflicts an existential dimension. Without them the opera would sound like an irrational fairy tale.