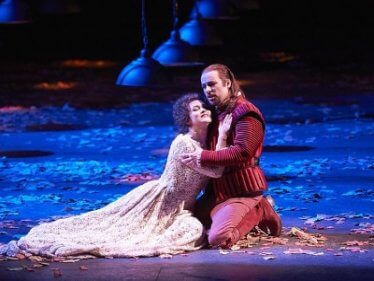 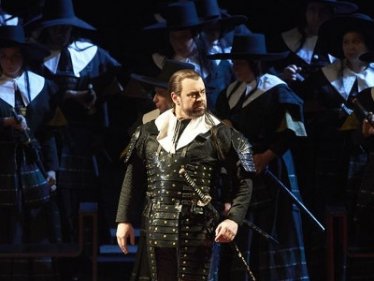 Act 1
Disconsolate and plagued by premonitions of death, the ageing Faust curses everything he once held dear: happiness, patience, belief, knowledge, fame and love. Determined to put an end to his life, he has prepared a poisoned goblet. However, each time he raises the goblet to his lips, he is prevented from committing suicide by the joyous, pious singing of the congregation which he hears outside his study. In his desperation Faust finally calls on Satan, who immediately appears to him in the form of Méphistophélès. In return for his soul, the latter promises him "a treasure which contains all" - his lost youth. Faust's initial hesitation to enter into such a pact is quickly overcome when Méphistophélès shows him a vision of the beautiful Marguerite. Enchanted by such a wonderful sight, Faust immediately signs the contract and is transformed into a young man.

Act 2
Méphistophélès quickly attracts the crowd's attention at a carnival by praising the power of money in a rousing song about the Golden Calf. A little later, he goes on to abuse the two people closest to Marguerite: Siébel, who is secretly in love with Marguerite, and her brother, the soldier Valentin, who is apprehensive for her. Faust spots Marguerite in the crowd and offers her his arm, which she refuses out of modesty.

Act 3
Marguerite is attracted to Faust in spite of herself, and constantly thinks about this mysterious man. This makes things easy for Méphistophélès, who continues to pull the strings. In order to kindle Marguerite's vanity, he arranges for her to find a casket of jewellery. Méphistophélès also orchestrates the next meeting between Faust and Marguerite in Marguerite's garden. At last the couple have an opportunity to get to know one another more closely. In the meantime, Marguerite's neighbour Marthe is distracted by Méphistophélès. Marguerite is absolutely enchanted by Faust's declarations of love, but initially turns down his pleas to be allowed to spend the night with her. However, no sooner has Faust left her side than she calls him back with tender endearments.

Act 4
After being made pregnant and abandoned by Faust, Marguerite is shunned by society. She nevertheless yearns to see Faust again. Only Siébel tries to offer Marguerite consolation. In her desperation, Marguerite goes to pray in a church, imploring God to give her forgiveness, but her prayers are interrupted by Méphistophélès. To make matters worse, Méphistophélès arranges a duel between Faust and Marguerite's brother Valentin, in which Faust fatally wounds Valentin.

Act 5
Méphistophélès takes Faust to a Walpurgis Night celebration where he will be seduced by beautiful courtesans and the queens of Classical antiquity. However, Faust has a vision in which he sees Marguerite, who has just killed her child in her mental confusion. At Faust's request, Méphistophélès leads him to Marguerite in prison. By refusing to flee with Faust and Méphistophélès and placing her trust in God, Marguerite is able to save her soul.