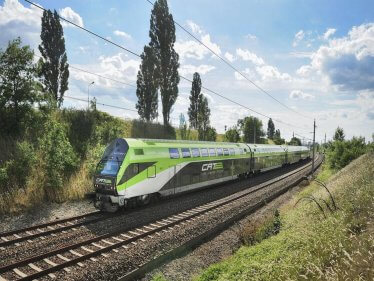 ITINERARY
This combination offer includes a return ticket from the Vienna airport to the city center by train as well as a HOP ON HOP OFF sightseeing bus ticket for Vienna. Save up to 6 € with this combination ticket and discover Vienna easily.
With the City Airport Train (CAT) you can travel non-stop from Vienna International Airport by train to the Wien Mitte train station in just 16 minutes – a stress-free and environmentally friendly way of travel. There you can change to the HOP ON HOP OFF bus (RED and BLUE LINE).

The CAT ticket also includes a city check-in option. You can check in at the station from 24 hours and up to 75 minutes before departure. Your luggage will be transported to the aircraft reliably and safely.
The CAT is accessible thanks to low-floor entry, allowing you to get on and off the train easily. It has wide corridors and areas reserved for wheelchair users.

With the HOP ON HOP OFF tours you can choose from up to 6 lines and 50 stops. Our buses are modern, comfortable and offer a perfect view of the city. As a special service, we offer free Wi-Fi on board.
Discover the Ringstraße boulevard with the RED LINE, take the YELLOW LINE to get to Schönbrunn, or take the BLUE LINE to the Prater. The GREEN LINE takes you to Kahlenberg and the GREY LINE to Carnuntum & Schloss Hof.
You can start your sightseeing tour at any HOP ON HOP OFF station! Museum of Applied Arts is just one possible starting points.

Free: guided city walk
In addition to your HOP ON HOP OFF bus tour, you can join a guided city walk through Vienna's city centre free of charge. The meeting point is in front of the Vienna State Opera.
HIGHLIGHTS
City Airport Train
In just 16 minutes from the airport to Wien Mitte
Free Wi-Fi
City check-in – check in luggage and get a boarding pass at the train station
HOP ON HOP OFF
Up to 6 routes and 50 stops
Short waiting times
Free Wi-Fi on board
Kids’ channel in English and German
Guided city walking tour

INCLUDED
Return ticket with the CAT
Free daily newspapers and magazines in English and German
City check-in at the terminal Wien Mitte in the city centre
HOP ON HOP OFF ticket valid for all lines (RED, BLUE, GREEN, YELLOW and GREY LINE)
Audio guide on the bus in 16 languages
Guided city walking tour