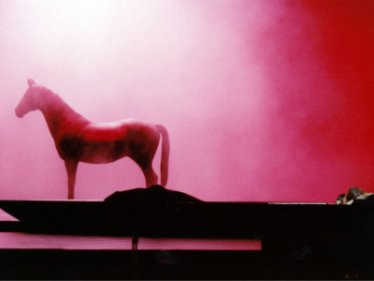 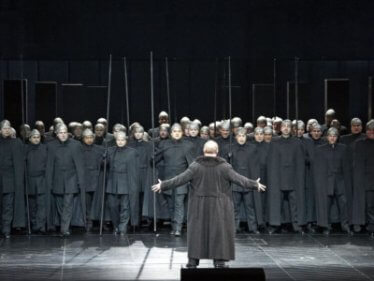 The three Norns are spinning the rope of Fate and discussing the past, the present and the future: Alberich’s theft of the Rhine gold, the curse of the ring, Wotan’s act of self-constitution in which he cleaved his spear, with all the scared pacts carved into it, out of the World Ash, which then withered and was cut down, and finally Siegfried`s meeting with Wotan. When the rope of Fate breaks, the alarmed Norns descend to their mother, Erda.

On the Valkyries’ rock, Siegfried takes his leave of Brünnhilde; she recited runes to protect him. As a token of his love, Siegfried gives her the ring of the Nibelungen.

ACT I
Hagen, son of Alberich, advises his half-brother Gunther and Gunther’s sister Gutrune on how to advance the fame of the Gibichungs: Gunther should marry Brünnhilde and Gutrune Siegfried. Siegfried enters, and, at Hagen’s prompting, Gutrune hands him a magic potion that immediately causes Siegfried to forget Brünnhilde – he falls in love with Gutrune. In order to win her, he promises to fetch Brünnhilde from the Valkyries’ rock for Gunther. After swearing an oath of blood brotherhood with Gunther, Siegfried departs to bring back Brünnhilde for Gunther.

In the meantime, Brünnhilde’s sister, the Valkyrie Waltraute, comes to visit Brünnhilde. She begs her sister to return the ring to the Rhinemaidens so that the curse may be lifted. However, Brünnhilde refuses to give up the ring, as it was Siegfried’s pledge of love to her.

Siegfried appears, transformed by the Tarn helmet into the figure of Gunther; he strides through the fire and overpowers Brünnhilde. As a sign of her marriage – to Gunther – he tears the ring from her finger.

ACT II
At night, Alberich urges his son Hagen to win back the ring for him. When Brünnhilde arrives with Gunther, she sees that Siegfried and Guntrune are a couple and, spying the ring on Siegfried’s hand, she accuses him of betraying her. Siegfried denies any wrongdoing, but Hagen, Gunther and Brünnhilde plot to kill him.

ACT III
Out hunting, Siegfried meets the Rhinemaidens, who beg him to give them the ring and warn him of its curse. Siegfried nonetheless keeps the ring. The hunting party joins him, and at the request of Hagen, Siegfried tells them the story of his life. As he talks, Hagen hands him a potion that restores his memories of Brünnhilde. Hagen regards this as an admission of betrayal and thrusts his spear into Siegfried’s back. As he dies, Siegfried recalls his love for Brünnhilde.

In the fight for possession of the ring, Hagen kills Gunther, but Brünnhilde now asserts her primary right to Siegfried – and the ring: she orders a funeral pyre to be built for Siegfried and then throws herself into the flames. The Rhine floods its banks and consumes the pyre, the three Rhinemaidens drag Hagen, who wants to keep the ring for himself, into the depths of the river, and the ring falls back into the Rhine. As Valhalla goes up in flames, with great anxiety humans witness the twilight of the Gods.