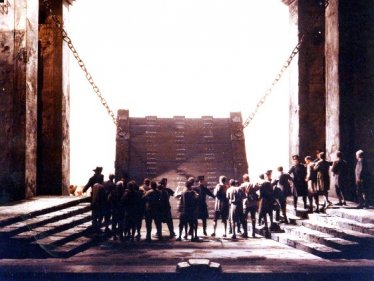 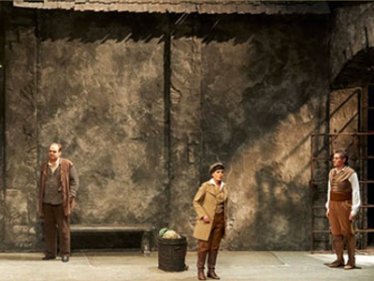 Act II
In the dungeon the weakened Florestan ponders his fate. His situation seems hopeless, and he is consoled only by the knowledge that he has done his duty. In an estatic vision he imagines that he is transported to heavenly freedom by an angel with the countenance of Leonore. Rocco and Fidelio / Leonore laboriously open up a cistern. Florestan finally learns who the governor of this prison is, and wants to send word to his wife in Seville. Fidelio / Leonore now knows for certain sho the man before her is. It would seem that a light meal of bread and wine ist o be Florestan´s last earthly pleasure, when Pizarro is heard approaching. As he draws back to deal the fatal blow, Fidelio / Leonore jumps in front oft he prisoner crying „First kill his wife!“ As she points a pistol at Pizarro, the trumpet signal is heard. The arrival oft he minister promises a different turn of events: release fort he oppressed, punishment fort he oppressor. Pizarro rushes out of the dungeon, Rocco dissociates himself from his former master, and Leonore and Florestan rush delighted into one another´s arms. _ Eagerly the people and the prisoners welcome the minister Don Fernando on the parade ground in front oft he palace. In the name oft he king, the minister pronounces a general amnesty and the end of political despotism. He recognizes Florestan as his old friend long supposed dead. Leonore is allowed to release the chains oft he man who has been humiliated for so long, and Pizarro is arrested. The jubilant crown applauds the reunited couple, raising their voices in praise of true love: „Never can one extol too highly the woman who saves her own husband!“