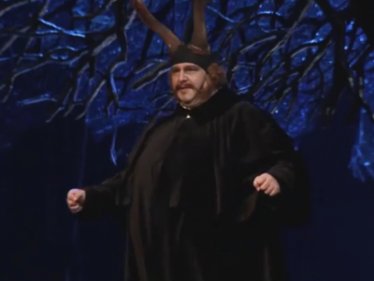 ACT I
Scene 1: Inside the Garter Inn
Falstaff is writing letters. Dr Caius enters and complains of various outrages committed against him by Falstaff and his followers, Pistola and Bardolfo. Falstaff unrepentantly admits to the accusations against him, but Pistola and Bardolfo deny the charges, claiming that Caius was so drunk at the time he didn´t know what was going on. Counting his money, Falstaff laments his impecunious state and announces his intention of repairing his fortunes by beginning affairs with the wives of two wealthy men who, he claims, are already smitten with his corpulent charms. He tells Pistola and Bardolfo to take the letters to the two ladies, Alice Ford and Meg Page, but they refuse, saying that such errands are contrary to their sense of honor. Falstaff derides their notions of honor and chases them off angrily, entrusting the letters to a page.

Scene 2: A garden outside Ford´s house
Alice and Meg meet, each bursting with news of a letter from Falstaff. They compare letters and find them identically phrased. Their amusement turns to indignation and they decide on vengeance. Nannetta, Alice´s daughter, and Fenton, her sweetheart, seize the opportunity to exchange stealthy kisses.
In another part of the garden, Pistola and Bardolfo tell Ford of Falstaff´s intentions. He arranges to be introduced to Falstaff under the name of Brook, so that he can keep an eye on him.
The ladies decide to send Mistress Quickly to Falstaff, giving him an assignation with Alice. They plan to play a trick on him, but Ford, whose jealousy is a burden to his wife, is not to know.

ACT II
Scene 1: Inside the Garter Inn
Falstaff is drinking. Pistola and Bardolfo pretend to be penitent for refusing to take the letters. Quickly brings the mesage that Alice will be waiting for Falstaff between two and three o´clock, when her husband is always absent. She tells him that both Alice and Meg are pining with love for him and that neither knows of his letter to the other. Ford, disguised, is introduced to Falstaff, spinning a tale that he has long pursued Alice in vain, and asking for Falstaff´s help, as a man of the world, to win her, suggesting that if Falstaff can break down her resistance, he will be able to follow suit. Falstaff replies that nothing could be easier - he already has an assignation with her. Ford seethes with rage and jealousy, but has to contain himself.

Scene 2: A room in Ford´s house
The ladies set the scene, with particular attention to a big laundry basket.
Nannetta tells her mother that her father insists she marry Dr Caius. Alice tells her not to worry, she will look after the matter. Alice takes up a lute while the others hide within earshot. Falstaff´s advances are interrupted when Meg rushes in to warn Alice that her husband is coming. They hide Falstaff behind a screen. Ford, Fenton, Caius, Pistola and Bardolfo search for Falstaff, beginning with the laundry basket. When they turn their attention elsewhere, the ladies bundle Falstaff into the basket. Hearing sounds behind the screen, the searchers pull it aside, revealing Nannetta and Fenton exchanging a kiss. Ford is furious.
Alice calls her servants and orders them to tip the basket, with Falstaff inside it, into the Thames.

ACT III
Scene 1:Outside the Garter Inn
The disconsolate Falstaff calls for wine to wash away the water of the Thames, becoming more cheerful as the wine takes effect. At first he refuses to listen to Quickly, who comes again as messenger from Alice, but relents when she assures him it was all a misunderstanding and Alice is desolated .
He is given another assignation, in Windsor Park at midnight, where he is to dress up as Herne the Hunter. The ladies, along with Ford, who has now been admitted to the conspiracy, listen and continue to plot. They plan to dress up as goblins, fairies and witches and take advantage of the legend that the park is haunted to frighten Falstaff.
Ford takes Caius aside and tells him to wear an easily identifiable costume, so that he can be married to Nannetta. But Quickly has overheard the plot.

Scene 2: Windsor Park
Fenton sings a serenade. Alice instructs him to put on a costume identical to that prescribed by Ford for Caius. They all hide as Falstaff appears. Alice meets him, but then runs away, claiming that Meg is following her. The witches and fairies appear, with Nannetta as fairy queen. They surround Falstaff, pinching and poking him, demanding that he repent of his wicked ways, but finally he recognises Bardolfo and the masquerade is over.
The ladies reprove him for even thinking they would have accepted him as a lover and Ford reveals himself as Alice´s husband, not the lovelorn Brook. He announces the marriage of the queen of the fairies, but two couples, similarly attired, step forward and he performs a double wedding. Unveiling reveals that Caius has been married to Bardolfo and Nannetta to Fenton.
Ford has to accept this with good grace, as Falstaff has accepted his humiliation. Falstaff is forgiven and all agree to dine together.
Show more Show less