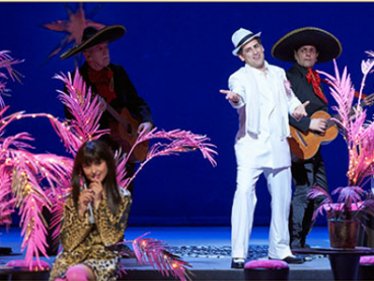 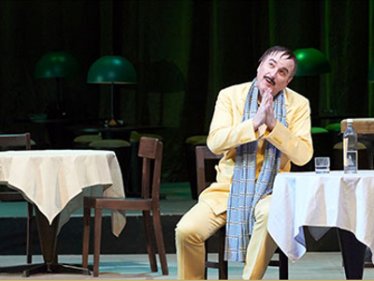 It is the serene figures, reminiscent of the Italian Stegreifkomödie, comedia dell'arte which: Here is a young, kapriziöse woman herumführt with self-confidence and wit älterlichen a would-be lovers on the nose. There, the right to truth lovers and between a wily Ränkeschmied. Gaetano Donizetti has with his Don Pasquale created an entertainment classics of the größten singers and performers a corresponding BUHNE offered since time immemorial. For three decades, no longer on the board of the Vienna Staatsoper this cheerful and lively work returns to the house back on the ring.

Ernesto has refused the woman that his uncle Don Pasquale had found for him, and as a result is to be disinherited. Ernesto declares his devotion to the young – but poor – widow Norina. In view of Ernesto's determination, Don Pasquale decides to marry in old age to produce his own heir, and anxiously awaits the arrival of his physician, Dr. Malatesta, who is determined to teach Don Pasquale how foolish he is being, but has been pretending to search for a suitable bride. Malatesta, confronted with Pasquale's impatience, mutters that he is a buffoon, but proceeds to describe the attributes of the bride-to-be (Bella siccome un angelo – "Beautiful like an angel"). Honest, modest and sweet – when pressed, Malatesta reveals she is in fact his sister. Overcome with joy, Pasquale demands to meet her at once, and sends Malatesta to fetch her, before singing of the love that has gripped him (Ah, un foco insolito – "A sudden fire").

Ernesto comes back and pleads with the Don to consult with his friend Malatesta – when he hears that Malatesta supposedly supports Pasquale, he is amazed at this apparent betrayal (Mi fa il destino mendico – "Fate has made a beggar of me"). Ernesto determines to elope and writes to tell Norina that all is lost.

Scenes 4–5: An apartment in the home of Norina

Norina sits alone, reading a book. She recites a passage, before laughing at the situation described and reflecting on her own temperament (So anch'io la virtù magica – I too know your magical virtues"). She is in cahoots with Dr. Malatesta and impatiently waits for him to come and explain his plan at which he had only hinted. A servant delivers the letter from Ernesto, which she quickly reads and is instantly dismayed.

Malatesta arrives to explain the stratagem, but Norina cuts him off and hands him the letter, which he reads aloud: Ernesto has announced his intention to leave Rome, and Europe altogether. Malatesta reassures her, saying that he has adapted his plan: Norina shall play the part of Malatesta's sister. Having arranged for his cousin to act as a notary, they will easily deceive the Don. Norina consents to play her part in the deception, and they discuss her strategies in a lively duet (Pronta son; purch'io non manchi – "I am ready; if I do not miss").

Act 2
A salon in the home of Don Pasquale

Ernesto is alone: lamenting his fate, he considers his decision to leave Rome (Cercherò lontana terra – "I shall seek a distant land"). He leaves the room just as Pasquale enters, dressed in his outdated finery, along with his servants, to whom he gives instructions to admit Malatesta on his arrival. He parades around in his grand costume, hoping it will conceal his advancing years.

Malatesta arrives with Norina in tow, and introduces her to Pasquale as his sister, Sofronia, fresh out of the convent. Pasquale is smitten, and Norina plays the part of a dutiful, modest and submissive lady, to Pasquale's satisfaction. Norina consents to the proposed marriage, which delights Pasquale. He wants to send for the notary to conduct the ceremony straight away – conveniently, Malatesta has brought one along, who waits in the antechamber.

Malatesta fetches the supposed notary, as servants arrange a table. Taking his seat, the "notary" writes out a marriage contract as dictated by Malatesta and Pasquale (Fra da una parta – "Between, on one hand"), where the Don bequeaths all his estate to be administrated by Sofronia. The contract is quickly drawn up: Pasquale signs but, before Norina can affix her signature, Ernesto bursts in. Intending to say a final farewell, he is amazed to see Norina about to marry Pasquale. However, Malatesta persuades him not to say anything (Figliol non mi far scene – "Son, don't make a scene"), and he is forced to act as the final witness much to Don Pasquale's delight.

As soon as the contract is signed, Norina abandons her pretence of docility, and refuses Pasquale's embrace. She announces her intention to teach him manners, and to have Ernesto as a gallant to accompany her on evening strolls. Pasquale is horrified at this transformation, while Malatesta and Ernesto can barely conceal their amusement (È rimasto là impietrato – "He stands there, petrified"). Summoning the household staff, Norina recites a long list of demands – more servants (young and handsome at that), carriages and horses, furniture – and instructs them to spare no expense doubling all their wages. Pasquale is stricken at his misfortune, so Malatesta urges him to go to bed.

Pasquale sits in a room, surrounded by piles of newly purchased jewels, dresses and the like, as the servants bustle in and out of Norina's apartment (I diamente presto presto – "The diamonds, quickly, quickly"). Dismayed by the piles of bills and invoices, the Don summons the courage to confront his tyrannical new wife. Norina emerges, dressed to go out. He attempts to reason with her, but she pays little heed (Dove corre in tanta fretta – "Where are you running in such a hurry"). He suggests that if she leaves, he may not allow her to return, an idea that she meets with patronising insincerity (Via, caro sposino – "There, there, dear little husband") but the discussion ends in her slapping him. As she exits, she drops a note which Pasquale picks up and reads. The note is addressed to Sofronia, arranging a meeting in the garden with its unnamed, admiring author. Pasquale calls for a servant to summon Malatesta, before leaving the room.

The servants return and, amongst themselves, at once complain at the amount of work they are being made to do, and reveal how much they are enjoying the farcical drama developing between Pasquale and his new wife (Che interminabile andirivieni! – "Such endless coming and going!"). At the approach of Malatesta and Ernesto, however, they exit, assured of more entertainment to come. Malatesta reminds Ernesto of the finer points of their plan, and the latter leaves. The doctor moves forward to greet Don Pasquale, who tells him of Norina's intended assignation, and his own plan to expose her unfaithfulness before a magistrate. Malatesta persuades him to moderate his plan and Pasquale, believing him an ally, consents to his conditions, while plotting his revenge on Norina (Aspetta, aspetta, cara sposina – "Wait, wait, dear little wife").

In the garden, as night draws in, Ernesto sings of his love for Norina, as he waits for her arrival (Com'è gentil – "How gentle"). At last, Norina emerges, and they express their love: (Tornami a dir che m'ami – "Say again that you love me"). Don Pasquale and Malatesta have observed and, as they reveal themselves, Ernesto covers himself with a cloak and runs to the house. Pasquale tries to confront Norina – he has caught her in flagrante – but this only provokes a fight that leaves the Don spluttering. She refuses to leave at his demand, so Malatesta, as per his agreement with Pasquale, takes over. Pretending to negotiate with Norina/Sofronia, he tells Pasquale that the only way to make her leave will be to allow Ernesto to marry his beloved, whom "Sofronia" apparently despises. Pasquale consents, and calls out to the house, from which Ernesto and the servants emerge. He instructs Ernesto to send for his would-be bride, but Malatesta reveals that Norina is in fact the woman Pasquale thinks he married, while the real Sofronia remains in a convent. All are reconciled, and the moral of the story – not to marry in old age – is revealed in a playful quartet (La moral di tutto questo – "The moral of all this").
Show more Show less