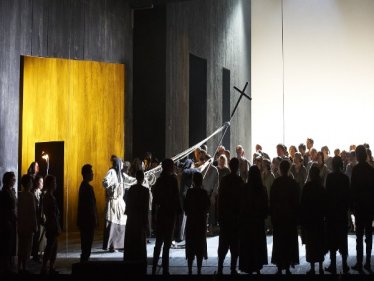 In the monastery of San Yuste, Emperor Charles V, the most powerful monarch in the world, lays down the insignia of his power. Here, away from the world, he intends to spend the rest of his life in solitude and spiritual meditation.

Act 1
At the tomb of his ancestors, Don Carlo reflects on the happy hours spent at Fontainebleau with his bride Elisabeth, who is now the wife of his father, his stepmother and queen. The Marquis of Posa has just returned from the Flemish provinces to find his childhood friend in deep despair. He convinces him that it is his duty to travel to Flanders to save the imperilled people there. Philip and Elisabeth enter the monastery to pray at the tomb of the emperor whom they suppose to be dead.

In a garden not far from the monastery Princess Eboli is entertaining the entourage of ladies-in-waiting with a Moorish song. As the queen appears, the Marquis of Posa is announced to her. In the course of their conversation Posa manages to secretly pass the queen a message from Carlo and to ask for an audience for him. Princess Eboli hopes to be able to win the Infante’s love. Alone with the queen, Carlo is no longer able to conceal his passionate emotion. Elisabeth still loves the prince, but is aware of her duty as queen. She entreats the dejected man not to hope for the fulfillment of his love. When the king enters unexpectedly and finds his wife alone and unattended, he banishes the Countess of Aremberg from court for leaving the queen unaccompanied. Fraught with emotion, Elisabeth bids her dismissed attendant farewell, sending her on her way with
greetings for the homeland she has been obliged to forsake. Filled with shame, the king remains behind. Posa takes advantage of this opportunity to tell the king about the misery of the people of Flanders. Philip, pleased by the Knight Hospitaller’s courageous words, resolves to keep him as a personal advisor, but warns him of the power of the Inquisition.

In the royal park in Madrid Don Carlo awaits the arrival of the writer of a letter whom he supposes to be the queen. As the veiled woman approaches, he showers her with declarations of love, realising too late that he has revealed his secret to Princess Eboli. Posa appears on the scene and is bent on silencing the dangerous party to Don Carlo’s secret. However, Carlo restrains him. Her pride wounded, the princess swears revenge. The marquis persuades his friend to hand over him all his compromising
correspondence.

A large crowd of people has gathered outside the cathedral in Madrid to witness the execution of the heretics condemned by the Inquisition. At the head of the Flemish delegation, Don Carlo confronts the king and asks to be appointed regent of the vanquished provinces. When the king rejects this request with scornful words, the prince is overcome with rage and draws his dagger. When none of the great statesmen of the kingdom comes to the aid of their threatened sovereign, Posa disarms his friend, a service for which Philip makes him a duke. The auto-da-fé continues. As the flames leap up the pyre, a consoling voice from Heaven promises the unhappy victims eternal peace.

Act 3
Alone in his study at night, the ageing, unloved king deplores the loneliness and burden of his office. Torn by his conscience, he seeks the advice of the blind Grand Inquisitor. The latter endorses his intention of punishing the Infante’s rebelliousness with the utmost severity. However, he in his turn demands the life of the Marquis of Posa, whom he suspects of free thought. Philip resists in vain, and is forced to submit to the power of the Curch. The queen complains vociferously to her husband about the disappearance of her jewel casket, and finds it on the king’s desk. When Philip opens the casket and finds a portrait of the Infante in it, he accuses the queen of adultery. Princess Eboli and the Marquis of Posa hurry in to assist the queen, who has collapsed in a faint. Left alone with the queen, the princess confesses her betrayal of Carlo and her secret liaison with the king. Deeply offended, Elisabeth banishes her to a convent.

Posa visits the Infante, who has been thrown into a dungeon, in order to explain his actions to him and bid him farewell. Using the letters entrusted to him, he has managed to shift the suspicion of conspiring with Flanders from Carlo to himself in the hope that this may enable his friend to become king, so that one day the oppressed peoples may be given their fundamental rights. A shot from the darkness hits the marquis in the back. With his dying breath he tells his friend to visit the queen, who has expressed the wish to see Carlo for the last time.

The king enters the dungeon to give his son his dagger back. Supposing him to be the murderer of his friend, Carlo disowns him. The enraged crowd clamours for the release of the Infante. When the crowd threatens to turn against the king, the aged Grand Inquisitor intervenes. The crowd relents in the face of his threats.

Act 4
The queen is waiting for the Infante at the monastery of San Yuste in order to bid him farewell for the last time before his imminent departure for Flanders. With aching hearts, the couple realise that they will have to renounce their earthly happiness. The king and the Grand Inquisitor enter. As the executioners of the Inquisition are about to lay hands on the prince, he is saved by a mysterious monk whose voice is similar to that of the deceased emperor. He places Don Carlo beyond the reach of earthly powers.
Show more Show less