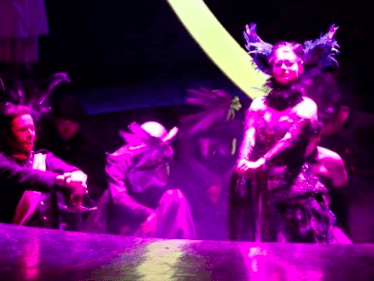 Mozart's “The Magic Flute” is a collective cultural heritage and the most played opera ever. It combines magic fairy tales and educational novels, Masonic symbolism and the tradition of Viennese suburban theater from the 18th century. It is puzzling and contradictory, and that is exactly its quality.
At the Volksoper Vienna, Mozart's universal work is a fixed star of the repertoire.

Henry Mason's new production and the new musical staging under the direction of Anja Bihlmaier invite us to take a fresh look at this work, which we believe we have known for a long time. Full of archetypal and aesthetic, historical-political and intercultural references, this re-examination puts the "magic flute" in current contexts and discourses. However, she does not lack a theatrical language that also fascinates and inspires young audiences, because: “The Magic Flute is one of the pieces that will delight a child as much as it will bring tears to the most experienced people, and may raise the wisest. Every individual and every generation finds something different in it. "(Alfred Einstein)