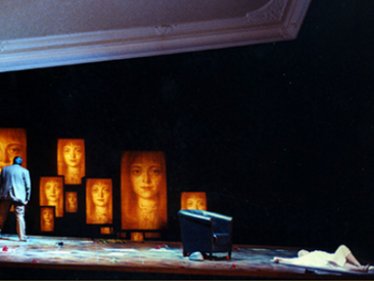 Paul has lived in Bruges for years, mourning the loss of his wife, Marie. He keeps everything that reminds him of her in a room in his house that he has turned into a “Temple of the Past”; the articles include a braid of his dead wife´s hair. When his friend Frank visits him, Paul tells him of his meeting with an unknown woman whose resemblance to Marie is remarkable. It is Marietta, a dancer who has an engagement top perform in Bruges and who has accepted Paul´s invitation to visit him. She accepts his bouquet of roses and, accompanying herself on Marie´s lute, sings an old, sad song. For Paul, his images of the dead Marie mingle increasingly with those of Marietta. When he tries to take her in his arms, she escapes his embrace and leaves for rehearsal, however not before encouraging him to see her again at the theater. Paul sinks into a deep reverie in which Marie steps out of her portrait and reminds him of his loyalty to her. Suddenly he finds himself on the quay in front of before Marietta´s house. Frank appears and has the key to her room. Paul strikes him down and grabs the key. Marietta returns from the theatre with the troupe of comedians and improvises the resurrection scene from Meyerbeers´s opera Robert de Diable on the street in honour of Count Albert. Marietta plays the resurrected Hélène. Paul rushes onto the scene and accuses her of blasphemy. Marietta takes up the struggle with her dead rival. After spending the night with her, Paul is filled with guilt. When a procession passes outside the house, Marietta mocks his piety. Finally, she seizes the braid of Marie´s hair. Paul tries to wrest it from her, pushing her to the floor and strangling her.
… Paul then awakes from his dream. Marietta appears to fetch the bouquet of roses she had forgotten. Frank also returns, and Paul decides to leave Bruges, the “city of the dead”, with him.
Show more Show less