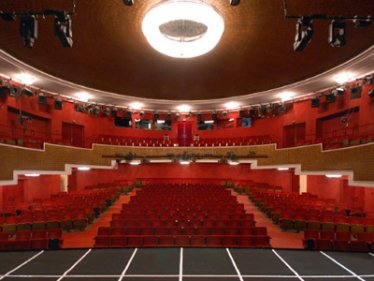 The army of the Persian king Dareios was founded in 490 BC. Defeated by the Athenians in the Battle of Marathon. Ten years later, his son Xerxes with a huge fleet of over a thousand ships against the Greeks to avenge the shame of defeat. Tormented by evil dreams and forebodings, the Persian king's mother Atossa waits for news from the war zone before Salamis. A messenger tells of the inhumane horrors of the battle. The Persian fleet was lured into an ambush and defeated by the far inferior Greeks crushing. Only the young King Xerxes has escaped with a small troop and retreating. The elders who stayed at home conjure up the spirit of their late general Dareios, who sees in the defeat of his son the divine punishment of the hubris of the young ruler. Xerxes returns heavily drawn from the battle, most of the men are lost, the conqueror population of the Persians is destroyed.

472 BC Aeschylus, who had belonged to the people of the victors and had fought with them, wrote from the point of view of the vanquished Die Perser, the oldest surviving tragedy of world literature, a teaching and admonishing piece about the Persian war and its defeat, written in a timely manner but alienated and moved to a foreign land. The Persians is not an anti-war piece in which the war is condemned as such. Apart from the fact that the ancient man could hardly imagine a world without war, the war as a life principle was in high regard. The Persians are rather a piece against the arrogance of armament and the blindness of warmongering. The main motive is the hubris. Like almost all the heroes of the Greek tragedy, Xerxes is destroyed by his own delusion.