Der Rosenkavalier - The Knight of the Rose - Schedule, Program & Tickets 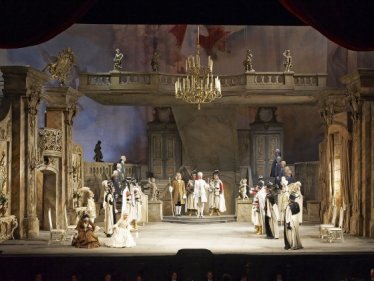 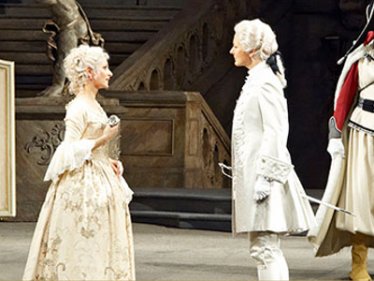 Der Rosenkavalier - The Knight of the Rose

As the only person of action the more mature Marschallin recognizes the nature of love in all its facets. It manages to pave through personal sacrifice, the way of the young couple Octavian and Sophie against the intentions of the greedy and lustful Lerchenau Ox.

Synopsis
Time: 1740s, in the first years of the reign of Empress Maria Theresa
Place: Vienna

Princess Marie Therese von Werdenberg (the Marschallin, the title given to a Field Marshal's wife) and her much younger lover, Count Octavian Rofrano, exchange vows of love ("Wie du warst! Wie du bist"). To avoid scandal, he hides when a small black boy, Mohammed, brings the Marschallin's breakfast. During breakfast loud voices are heard in the garderobe and not the main door. The Marschallin believes that it is her husband who has returned unexpectedly from a hunting trip and has Octavian hide behind the bed. He reappears disguised as a chambermaid, "Mariandel" ("Befehl'n fürstli' Gnad'n, i bin halt noch nit recht..."), and tries to sneak away through the garderobe. But the Marschallin's country cousin Baron Ochs auf Lerchenau has unexpectedly entered through that same door to discuss his engagement to Sophie ("Selbstverständlich empfängt mich Ihro Gnaden"), the daughter of a wealthy merchant who has been recently elevated to nobility by the Empress. After boorishly describing his personal pastime of chasing skirts, and demonstrating it on the disguised Octavian, he asks the Marschallin to recommend a young man to serve as his Rosenkavalier ("Knight of the Rose"), who will deliver the traditional silver engagement rose to Sophie. She suggests Octavian. When Ochs sees the young count's picture, he notices the count's resemblance to the chambermaid "Mariandel", and assumes that she is Octavian's illegitimate sister. Ochs boasts that nobility should be served by nobility, which leads to a confession that he has an illegitimate son working for him. The coarse Ochs propositions the "chambermaid". Octavian plays coy and leaves at the first chance.

The room then fills with supplicants to the Princess ("Drei arme adelige Waisen"). An Italian tenor sent by the Portuguese ambassador serenades the Marschallin ("Di rigori armato"), while Ochs works out the marriage contract with the Marschallin's notary. Two Italian intriguers, Valzacchi and Annina, try to sell the Princess the latest scandal sheets. Rudely interrupting the tenor's song, Ochs tells the notary to demand a dower from Sophie's family (having confused dower with dowry). The notary attempts to explain that such is impossible under the law. Valzacchi and Annina now offer their services to Ochs. He asks whether they know anything about the Princess's "maid". They don't, but they assure him that they do. Amidst all the activity, the Marschallin remarks to her hairdresser: "My dear Hippolyte, today you have made me look like an old woman." ("Mein lieber Hippolyte").

When all have left, the Marschallin, reminded of her own early marriage by Ochs's young bride, sadly ponders her fleeting youth and the fickleness of men ("Da geht er hin..."). By this time Octavian returns (in men's clothes) ("Ach, du bist wieder da"), she has realized that one day he will leave her ("Die Zeit, die ist ein sonderbar Ding"). She muses on the passage of time (a clock is heard chiming thirteen times), and turns Octavian away. After he has left, she suddenly realizes that she has forgotten to kiss him goodbye, and sends some footmen after him; however, it is too late, he is gone. The Marschallin summons her page to take the silver rose to Octavian to deliver to Sophie. After Mohammed departs, Marie Therese stares pensively into her hand mirror (or similar) as the curtain falls.

Herr von Faninal and Sophie await the arrival of the Rosenkavalier (Knight of the Rose), Octavian ("Ein ernster Tag, ein grosser Tag!"). Following tradition, Faninal departs before the Knight appears. Sophie frets over her approaching marriage with a man she has never met as her duenna, Marianne, reports on the approach of Octavian ("In dieser feierlichen Stunde der Prüfung"). Octavian arrives with great pomp, dressed all in silver. He presents the silver rose to Sophie in an elaborate ceremony. Immediately, the two young people are attracted to each other and they sing a beautiful duet ("Mir ist die Ehre widerfahren...").

During a chaperoned conversation, Sophie and Octavian begin to fall in love (in this conversation she reveals Octavian's full name: Octavian Maria Ehrenreich Bonaventura Fernand Hyacinth Rofrano, aka Quinquin in intimacy). Ochs enters with Sophie's father ("Jetzt aber kommt mein Herr Zukünftiger"). The Baron speaks familiarly with Octavian (though they have never officially met), examines Sophie like chattel and generally behaves like a cad, also "revealing" that Octavian has illegitimate family. Ochs's servants begin to chase the maids, sending the household into an uproar. Sophie starts to weep, and Octavian promises to help her ("Mit Ihren Augen voll Tränen"). He embraces her, but they are discovered by Ochs's Italian spies, who report to him. Ochs is only amused, considering the much younger Octavian no threat, but Octavian's temper is raised enough to challenge the bull-headed Ochs to a duel. Ochs receives a slight wound in the arm in the fracas and cries bloody murder. As a doctor is sent for, Sophie tells her father that she will never marry Ochs, but her father insists, and threatens to send her to a convent. Octavian is thrown out, and Sophie is sent to her room. As Ochs is left alone on the divan with his wounded arm in a sling, he begins to raise his spirits with a glass of port. Annina enters with a letter for Ochs from "Mariandel" asking to meet him for a tryst. The now recovered and drunk Ochs, in anticipation of his imminent meeting, dances around the stage to one of the opera's many ironic and wry waltzes, refusing to tip Annina, who silently swears revenge ("Da lieg' ich!").

Act 3
A private room in an inn

Valzacchi and Annina have switched alliances and are now helping Octavian prepare a trap for the Baron. There is far more than meets the eye about the room that Valzacchi has rented for the Baron's tryst, and in a pantomime all the preparations to trap the Baron and foil his engagement with Sophie are seen.

Ochs and "Mariandel" arrive for a rendez-vous. Ochs tries to seduce the seemingly willing chambermaid, though he is disturbed by her resemblance to Octavian. The guilt-ridden baron catches glimpses of the heads of Octavian's conspirators as they pop out of secret doors. A woman (Annina in disguise) rushes in claiming that Ochs is her husband and the father of her children, all of whom rush in crying "Papa! Papa!" The confusion grows and the police arrive, and to avoid a scandal, Ochs claims that "Mariandel" is his fiancée Sophie. Octavian lets the Police Inspector in on the trick, and the Inspector plays along. In the meantime Ochs tries to pull his noble rank to no avail, claiming that "Mariandel" is under his protection. Furious to be enmeshed in the scandal, Faninal arrives and sends for Sophie to clear their names. Sophie arrives and asks Ochs to leave her alone. Just as Ochs is completely befuddled and embarrassed, the Marschallin enters. The Police Inspector recognizes her, having previously served under her husband. The Marschallin sends the police and all the others away. Ochs still tries to claim Sophie for himself after having realized the truth about the Marschallin and Octavian/Mariandel's relationship, even attempting to blackmail the Marschallin, but is ordered to leave gracefully. Salvaging what is left of his dignity. Ochs finally leaves, pursued by various bill collectors.

The Marschallin, Sophie, and Octavian are left alone. The Marschallin recognizes that the day she so feared has come, as Octavian hesitates between the two women (Trio: Marie Theres'! / Hab' mir's gelobt). In the emotional climax of the opera, the Marschallin gracefully releases Octavian, encouraging him to follow his heart and love Sophie. She then withdraws elegantly to the next room to talk with Faninal. As soon as she is gone, Sophie and Octavian run to each other's arms. Faninal and the Marschallin return to find the lovers locked in an embrace. After a few bittersweet glances to her lost lover, the Marschallin departs with Faninal. Sophie and Octavian follow after another brief but ecstatic love duet (Ist ein Traum / Spür' nur dich), and the opera ends with little Mohammed running in to retrieve Sophie's dropped handkerchief, and racing out again after the departing nobility.