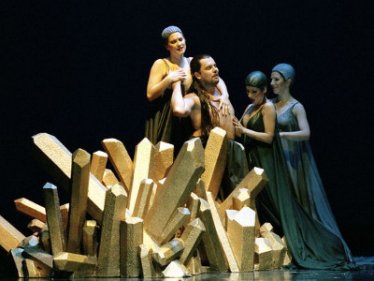 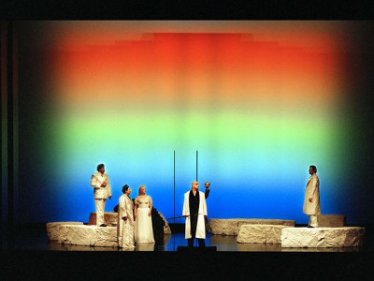 Details
Deep in the River Rhine, the three Rhine maidens guard the Rhine gold. The dwarf Alberich, ruler of the Nibelungs, watches them and tries – in vain – to capture one of the maidens. When the gold gleams in the morning sun, Alberich learns that it can only be stolen by someone who has renounced love for all time. The owner will then be able to fashion the gold into a ring that will invest its wearer with immense power. Alberich immediately renounces love, steals the gold and fashions the ring.

The giants Fafner and Fasolt have built the castle of Valhalla for the gods. Wotan, King of the gods, has promised the goddess Freia to them as a reward for building Valhalla. When the giants demand their prize, the other gods try to defend her, but as the god of treaties, Wotan knows that he must keep his word. All of them await the arrival of Loge, the cunning god of fire, who they hope will come up with a solution to the problem. Loge finally arrives and tells them that Alberich has stolen the gold and in so doing has acquired enormous power. The giants listen attentively and agree to relinquish Freia iif they can have Alberich’s gold as compensation within a day. However, in the mean time they drag Freia off with them as a hostage. The gods immediately begin to grow older, as Freia is the only one who knows hoe to cultivate the golden apples that give them eternal youth. Wotan and Loge set off for Nibelheim to trick Alberich out of the ring.

Alberich has the Nibelungs laboring for him, amassing a huge hoard of gold. Alberich plans to accumulate enough gold to make him the most powerful being in the world so that he can depose the Gods. His brother Mime must manufacture the Tarn helmet for him; it allows the wearer to assume any desired form. When Wotan and Loge ask Alberich for proof of the Tarn helmet’s magic powers, Alberich puts on the helmet and turns himself into a toad. Wotan and Loge immediately seize him, blind him and drag him away. To regain his freedom, Alberich must surrender the gold, the Tarn helmet and the ring to Wotan. But as he departs, Alberich curses the ring: besides power, it will bring death and misfortune upon its owner. Wotan reluctantly gives the gold to the giants, but hands over the ring only when the goddess Erda steps in and warns him of the misery that the ring will bring. Freia is set free, but the curse of the ring has already begun to work: in a dispute over the gold, Fafner slays his brother Fasolt.

The gods return to the castle, and the Rhine maidens bemoan the loss of the Rhine gold. Only Loge foresees the downfall of the gods, despite the magnificent procession entering Valhalla