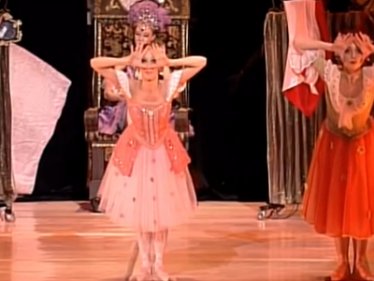 Act 1
The scene is a small town in Poland, near the Galician border. The billposter sticks up a bill calling the people’s attention to the celebration of the inauguration of the bell and to the dancing competition. Swanilda the bell-founder’s daughter is going to take part in the competition and she is proud to show her new dress to her friends. The square fills with people. The young men’s attention is drawn by the girl sitting by the window in the house of the old jack-of-all-trades Coppelius. They start a virtuoso dance to arouse her interest. Swanilda’s fiancé Francois also takes part in the dance, at the end of which the unknown beauty drops a handkerchief to thank them for the performance. Francois picks it up proudly but, at this moment, Swanilda appears. She has seen everything and runs away wounded in her pride.

Driven by curiosity, the boys make noise around Coppelius’ house. The man sets out to chase them away but he loses the key to the gate, which is found by a friend of Swanilda’s. The girls are also curious about the house and the mysterious girl, so they creep into the house, Swanilda among them. Arriving in excitement, Coppelius hurries in through the open door of his house in bad suspicion.

Act 2
The girls look around Coppelius’s study in shy curiosity. Swanilda is interested in nobody but her rival. She steps closer to perceive that it is only a doll. Playing obliviously, the girls wind up the doll, which starts dancing. Coppelius arrives and drives the intruders out of the house. He is ready to get down to work to bring his favourite doll Coppelia to perfection. He carries her out of the window-niche. Later on he notices that a living person is hiding behind the mask. It is Swanilda – to escape Coppelius’ wrath she donned the doll’s clothes and mask. The old man becomes furious, but he is willing to pardon the girl if she puts on the doll’s mask again to teach Francois a lesson.

The boy soon rolls into the room through the chimney. Coppelius chases him, then threatens him with various devices, and eventually introduces Coppelia to him. Francois behaves shyly at first, but later he starts courting her with more and more passion. Swanilda cannot take any more. Tearing her mask off, she runs away. Coppelius watches the scene with malice: his plot has worked. The deceived boy smashes things to pieces in his rage and hurries away with the real Coppelia doll.

Act 3
The bell inauguration feast is about to start. Francois arrives at the square with the Coppelia doll. The girls watch the boys scornfully: Was all the excitement about this ‘girl’? Francois asks Swanilda to forgive him when suddenly confusion breaks out. Coppelius rushes in to complain to the mayor about the great wrong he has suffered, demanding satisfaction. The mayor pays for his damage and Coppelius leaves the scene with his doll. Everybody is happy about what has happened. The young people start dancing, and then they celebrate the winners of the competition, the betrothed Swanilda and Francois.
Show more Show less