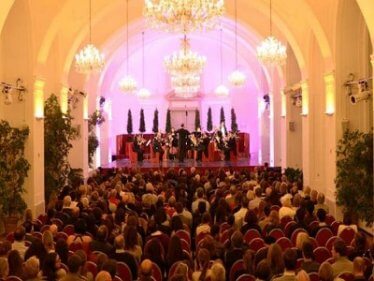 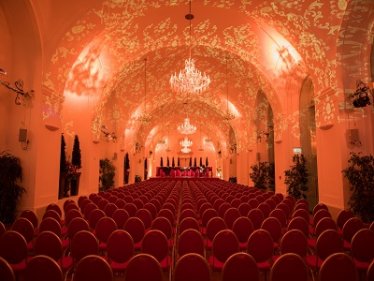 • Daily concert
• Highly qualified and internationally sought-after musicians
• Original location of the world-famous competition between Mozart & Salieri (1786)
• Free choice of seats in the selected category at the Schönbrunn Palace concert
• VIP category only: a glass of sparkling wine or orange sparkling wine at our concert bar and one CD per person

In the revitalized Schönbrunn Orangery, where Mozart himself played music, the Schönbrunn Palace Orchestra awaits you for an enchanting concert with selected works by Mozart and Strauss, accompanied by dance and song.

In the first part of the concert you can enjoy some of the most beautiful overtures, arias and duets from Wolfgang Amadeus Mozart's concerts and operas, such as “Le Nozze di Figaro”, “The Magic Flute” and “Don Giovanni”.

The most popular operetta arias, waltzes and polkas of the waltz king Johann Strauss - from "Die Fledermaus" and "Der Gigeunerbaron" to the "Donauwalzer" and the "Radetzky March" - will delight you in the second part of the concert.

During the concert evening you will be accompanied by two opera singers, a soprano, a baritone and a charming ballet couple.

Attention: Due to the corona pandemic, there is currently no ballet at the concerts.

On selected dates, the concerts take place in the Great Gallery or in the white gold room directly in the palace, in the Schönbrunn Palace Theater or in other concert halls in Vienna.