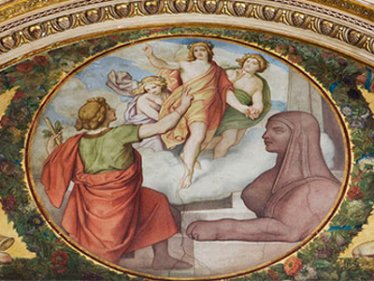 The overture "Dawn on the Moscow River": an era of tumult, everyone in the state is fighting everyone else to gain power At the present time, Prince Ivan Khovansky and the troops he leads seem to be in control.

ACT I
Moscow, early morning after yet another pogrom. The soldiers (streltsy) are bragging about their bloody revenge on the hated princes. Prince Shaklovity dictates to the scribe a denunciation of his enemy, Prince Ivan Khovansky. The denunciation is addressed to the young Tsar Peter I, who does not yet have real power. Simple people from the region surrounding Moscow enter the scene. They are illiterate and ask the scribe to read the news to them. The people learn of the death of the prince and of other atrocities committed on Khovansky's orders. Triumphant soldiers pay homage to him. In full view of everyone, Khovansky's son Andrei chases the foreign girl Emma and tries to take her by force. Only the intervention of Marfa, Andrei's former lover, saves the girl. Ivan Khovansky orders his soldiers to seize Emma, whom he finds pleasing. A quarrel breaks out between father and son. The appearance of Dosifei, leader of a radical, nationalist and religious sect, puts an end to the quarrel. Father and son retreat before the force of will of their ideological rival. Unrest lies in the air.

ACT II
Prince Galitsin, another contender for power and in favour of moderate westernization, is plagued by doubts and anxiety about the future. He asks Marfa to predict the future for him. Marfa prophesies disgrace and exile for him. On hearing this, the superstitious prince flies into a rage. He orders that Marfa be drowned. The representatives of all the political powers meet at Galitsin's residence. A quarrel flares up between Khovansky, Galitsin and Dosifei – the ideological rivals cannot be reconciled. Marfa returns unexpectedly, having managed to escape her murderers. She brings shocking news: while the experienced politicians fight for power with each other, a new political force has emerged in the land – the young tsar Peter and his guard. Prince Shaklovity enters. He announces news that is terrible for Khovansky: through the denunciation the young tsar Peter has learned that the Khovanskys are "planning a coup d'état". Peter has classified Khovansky's actions as treason and given the crime the name of the perpetrator: "Khovanshchina" ("Khovansky intrigue"). The tsar has ordered that Khovansky be eliminated.

ACT III
Unrest is festering in the people. Marfa is finding it hard to bear Prince Andrei's unfaithfulness – when she seduced the son of Prince Khovansky on the instructions of the party, she fell seriously in love with him. Marfa's love sickness incites Susanna, who has been spying on her. Susanna is a no less fanatic disciple of Dosifei. Susanna cannot forgive Marfa for the emotions that she has aroused in her. Dosifei rebukes Susanna and comforts Marfa. Shaklovity prays – he believes he will be Russia's saviour and worthy of power. He sees Khovansky's drunken soldiers. Their wives are trying to calm them down, but their wild activities take their course. The scribe announces that Peter's guard has attacked. The soldiers expect Khovansky to lead them against the enemy, but their commander is deeply depressed. His power is declining, his life is in danger.

ACT IV
After refusing to march against Peter, Khovansky has taken refuge in his house, where he believes he is safe. He orders his "harem ladies" to entertain him by way of distraction. A confidant of Galitsin warns Khovansky of imminent danger. Prince Shaklovity appears and asks Khovansky to appear before the state council – he has been invited to attend. Khovansky trusts Shaklovity – and dies by the hand of an assassin sent by Shaklovity.

Marfa's prophecy has been fulfilled: Galitsin has also been eliminated. Dosifei seems to have no more adversaries when Marfa tells him of Peter's decision to kill him and his disciples. With malicious glee, Marfa reports the death of his father to Andrei. Peter's soldiers lead Khovansky's soldiers to be executed. Andrei begs Marfa to save him. With the news of a pardon from the tsar, Peter's representative Prince Streshnev gives Khovansky's soldiers new hope.

ACT V
Dosifei, his adherents and all those who fear possible changes in the land prepare to commit self-immolation. The salvation that Marfa promised Andrei is the fire in which she is united with him.

A mass ritual suicide takes place in which the past, present and future of the country are transformed to ashes.
Show more Show less