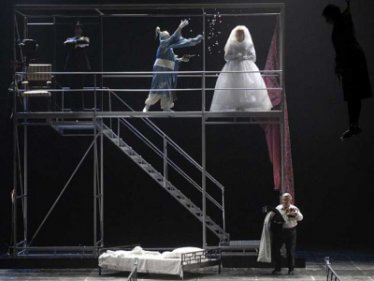 Dramma lyrico in three acts
Libretto by Giuseppe Adami and Renato Simoni,
after the play by Carlo Gozzi
First performed on 25th April 1929 in Milan
Premiered at the Deutsche Oper Berlin on 13th September 2008

Society lives in terror of a Princess. Turandot, the fascinating and beautiful representative of a ruling dynasty, presides over the cruelty. Matrimony alone seems likely to end the violence, yet no suitor has managed to solve her riddles and win her hand. Time and again the same scene is played out, ending in yet another execution. Against all expectations, Calaf, son of an exiled potentate from a far-off country, breaks the mould. He answers her questions and crowns his triumph by turning the tables, extending the game of riddles and asking the Princess a question in return.

In his early sixties Puccini is still keen to break new ground. Society is in a state of flux, huge changes are sweeping the art world, fresh and more abstract forms are asserting themselves as a way of expressing the world as we know it. Puccini spent the last four years of his life working on TURANDOT, basing his opera on Carlo Gozzi's fairytale play of 1762. Far from conjuring up an endearing, doll-like China, the exotic tones of this, his richest and most dissonant score, present us with a world steeped in an atmosphere of inconceivable cruelty.

The resolution of the drama was to prove an insurmountable obstacle for Puccini. Although he was uneasy at the prospect of any opera of his ending happily he never extricated himself from the cul de sac into which he had manoeuvred himself with the selfless death of Liu and the imminent coming together of Turandot and Calaf. The question as to what might possibly draw these two characters together remained unanswered. The notion of an all-encompassing love as an instrument of redemption that overcomes all obstacles so fascinated and repelled Puccini that he found himself unable to capture this Utopia for the stage. When he died in 1924 with the work unfinished, the publishing house of Ricordi commissioned the composer Franco Alfano to complete the opera in line with sketches left behind by Puccini.

“There exists a form of violence that is bent on destroying the body, not as a result of, or companion to, another type of violence, but purely as a deliberate act directed against that particular body. I call this form of violence “autotelian”. Our Western literature begins with the description of an excessive use of autotelian violence: Achilles is not content with killing Hector; he wants to destroy his body. In building the Colosseum, one of the most famous edifices on earth, Rome was erecting a structure dedicated to the public delight in spectacles of autotelian violence.

In our modern rush to revile the connection between might and violence we have forgotten how to recognise it when we see it. In our eyes violence is committed either illegitimately [crime] or legitimately [for the prevention of crime] or as an act of war designed to disarm a threatening enemy. Rapacious violence is either criminalised or, in wartime, denied; it is no longer tolerated, even within families. At best, we perceive autotelian violence as a peculiar form of madness, to be abhorred when encountered in the real world and loathed when viewed in the media.