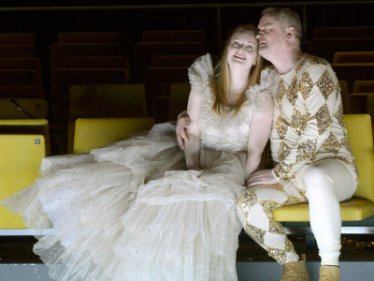 Melodramma in 3 acts;
Libretto by Francesco Maria Piave;
First performed on 11th March 1851 in Venice;
Premiered at the Deutsche Oper Berlin on 21. April 2013

"From a purely theatrical point of view I consider "Rigoletto" to be the best story that I've set to music so far […]. It has really powerful scenes, temperament, pathos, a lot of variety." (Verdi to Antonio Somma, 22.4.1853)

In listing the attributes of his 1851 melodrama, adapted from Victor Hugo's hit play "Le roi s'amuse", Verdi is also describing the challenges that any production of this opera must rise to. RIGOLETTO is a masterpiece whose charm lies precisely in the confrontation between psychological portraiture and the unlikely turns of a fantastical tale, a tale that is half tragedy, half romantic horror story. For better or worse, despite his grotesque physique, the hunchbacked jester-hero has to get his audience laughing. His daughter Gilda seems angelic by contrast - and yet human through and through in her unconditional love and self-sacrifice. This blend of realism and the fantastic makes the RIGOLETTO material a worthy challenge for the great directors. Following on from Hans Neuenfels' successful 20-year run with the work at the Deutsche Oper Berlin, Jan Bosse is now grasping the nettle. Since turning to musical theatre in recent years [ORFEO, LA CALISTO] the feted theatre director now delivers not only his first Verdi but also his first work for a Berlin opera house.